This festive season London Mums has teamed up with LEGO® to give away a bundle of their predicted Christmas best sellers! This Green NRG Dragon by LEGO® worth £44.99 is the third Christmas giveaway. Tomorrow we will be posting a new LEGO® competition so keep your eyes peeled. 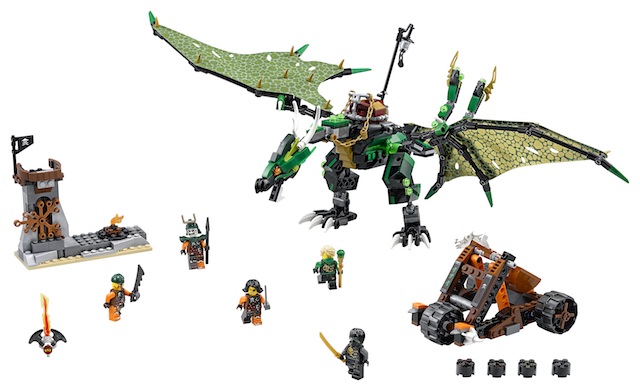 Place Green Ninja Lloyd on the saddle, grab the chain reins and launch into the air. Flap the Green NRG Dragon’s huge wings to fly high and attack the sky pirates’ lookout tower with its snapping mouth and dangerous talons. Swerve through the air to avoid shots from the pirates’ mobile catapult and fire back with the stud shooters in the dragon’s tail. Team up with Ghost Cole to triumph over Battle Doubloon and his crewmates and claim the Djinn Blade!

For your chance to win The Green NRG Dragon by LEGO®, write the name of your favourite dragon in a film in the competition form below this post. Deadline to enter is midnight on 17th December 2017. For more Christmas competitions visit our special giveaway section.

For inspiration on dragons in films, take a look at this feature.

This entry was posted on Friday, November 17th, 2017 at 2:04 pm and is filed under Competitions. You can follow any responses to this entry through the RSS 2.0 feed. Both comments and pings are currently closed.