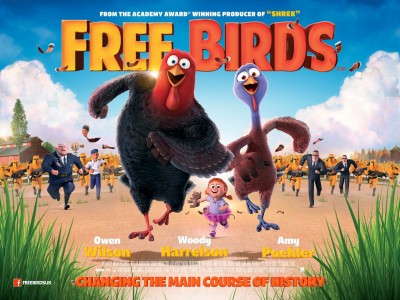 After surprisingly becoming the pardoned turkey and being adopted as the pet of the President’s daughter, Reggie is living the life at Camp David, becoming addicted to pizza and trashy TV.

This bliss doesn’t last for long, once he meets Jake (played by Woody Harrelson) who has appointed himself the leader and one and only member of the Turkey Freedom Front. Jake kidnaps Reggie and brings him along on his adventure to get Turkeys off the menu for good.

With a strong established cast (Woody Harrelson, Amy Poehler, Owen Wilson, George Takei) this high quality animation is sure to be a hit with kids and keep them entertained over and over again.

Free Birds is available now to download in HD from here.

To enter this competition, please enter the answer to this simple question in the competition box below this post before 24th April 2014:

Who is your favourite  animated family film of all times?

Tags:  animated family film competitions family film win
This entry was posted on Monday, April 7th, 2014 at 1:21 pm and is filed under Competitions. You can follow any responses to this entry through the RSS 2.0 feed. Both comments and pings are currently closed.