With the biggest footballing tournament in the world on the horizon, Topps has launched its Official England World Cup Sticker Collection, featuring the England team in the very latest official kit.  The collection showcases the entire England Squad as well as Brazil-bound superstars from all over the globe. Collectors can get fully clued up about the England team thanks to a host of stats and facts.  Fans can also look out for special shiny editions of international stars such as Van Persie and Ronaldo, too! 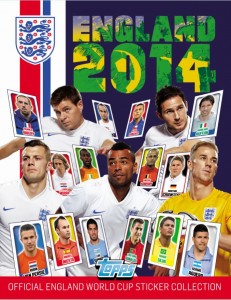 We’ve teamed up with Topps to offer two lucky readers the chance to really get ‘stuck in’ to the action with a super-cool complete set of stickers for the England team, plus a Starter Pack, which includes an album loaded with facts and stats, plus four packets of stickers! What’s more, 10 runners up will also get a Starter Pack.

To be in with a chance of winning, all you have to do is letting us know what your favourite football teams in the World Cup are.  Please write your answer in the form below this post.

The Topps Official England World Cup Sticker Collection is available in all good retailers, newsagents and independent stores across England now. Starter Packs retail at £2 with packets of stickers costing just 25p for at least seven players per packet!

This entry was posted on Saturday, April 26th, 2014 at 12:00 pm and is filed under Competitions. You can follow any responses to this entry through the RSS 2.0 feed. Both comments and pings are currently closed.