WILL YOU DRESS LIKE A LONDON BUS FOR WORLD BOOK DAY? For the World Book Day and Week 2017, join our wonderful London-themed competition: Dress like Beatrice and the London Bus. Get your children to dress like the adventurous and fun characters of the Beatrice and the London Bus children’s book series and win amazing prizes sponsored by Coca-cola London Eye, The Classic Tour, KidZania London and Daily Fairy Tales. 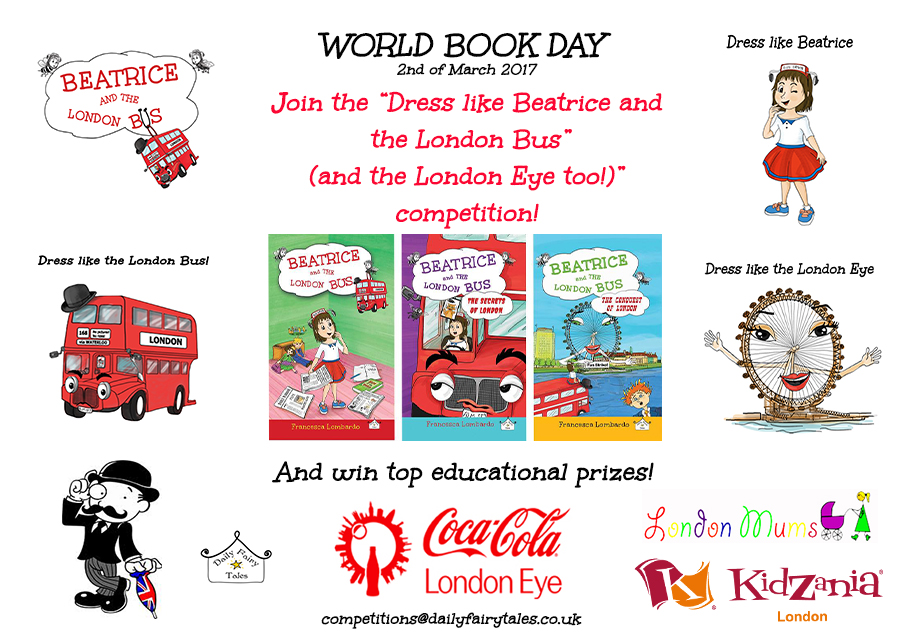 In Beatrice’s universe, there is not only the London Bus who can talk but also London buildings and famous tourist attractions and, they all seem to have their own dreams, problems complaints and fun stories to tell. You can read about all of them in the three volumes of Beatrice and the London Bus book series…. The secrets of London -The Conquest of London. And, you can read everything about our London Eye character in volume 3 – The Conquest of London!
The competition is open to all years of primary schools as well as to SK3.

And here are the prizes for the best Beatrice, London Bus, Coca-Cola London Eye costumes!

The competition can be entered individually (the child will represent his class) and by schools.
Pictures will be published on the Beatrice and the London Bus website (we will try to publish all pictures we receive).

The winning children/schools will be announced by the 22th of March 2017.

Pictures of costumes must be sent to competitions@dailyfairytales.co.uk or post it on our FB page, by the 10th of March by parents directly or by schools. IMPORTANT: Always specify the name of the school attended by the child, name and age of the child as a caption of the picture (rename the picture with those info).

To inquire about a Beatrice and the London Bus book event and workshop for your school across the country, please email workshops@dailyfairytales.co.uk

Quotes:
Top ten Children’s Books about London. In the 150th anniversary of Alice in Wonderland it’s great to see another child heroine taking on a traditionally male task. She shows personality and determination, hence she is setting an example for young girls.” London Mums Magazine

“We very much enjoyed your story idea and really appreciate your enthusiasm and passion for London. We wish you the very best of success with your wonderful story.”The Mayor of London Quote about the Beatrice and the London Bus book series – 2013

“We’re thrilled that the Coca-Cola London Eye has been included amongst Beatrice’s travels!  This is a great book for getting children engaged with our wonderful city” Coca Cola London Eye on Beatrice and the London Bus book series

This entry was posted on Wednesday, February 22nd, 2017 at 12:15 pm and is filed under Competitions. You can follow any responses to this entry through the RSS 2.0 feed. Both comments and pings are currently closed.