Yours to own on DVD, Blu-ray, 3 Disc Triple Pack DVD and Download from 2nd November 2015, Entertainment One (eOne) is pleased to announce that the beloved Nativity franchise is back – with NATIVITY 3: DUDE, WHERE’S MY DONKEY?

To celebrate its release, we are offering one lucky winner the chance to take home a spectacular merchandise pack and a copy of the film on DVD – available to pre-order now from Amazon. 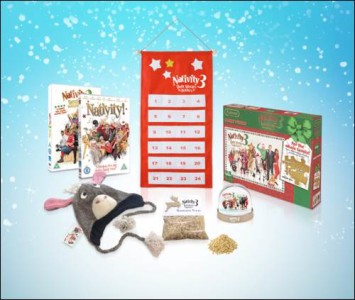 With a whole range of special features, including Sing-A-Longs and Bloopers, NATIVITY 3: DUDE, WHERE’S MY DONKEY? is the perfect Christmas film that all the family can enjoy.

This Christmas the pupils of St Bernadette’s and their much-loved, madcap teacher Mr. Poppy (MARC WOOTTON) are back for their biggest adventure yet involving fantastic flashmobs, excitable elves, Christmas carols and of course Archie the donkey!

When their new teacher Mr. Shepherd (MARTIN CLUNES) loses his memory and forgets all about Christmas, as well as his fiancée Sophie (CATHERINE TATE) and the whereabouts of the beloved Archie, it’s up to the pupils of St Bernadette’s to save the day.

Led by the ever enthusiastic Mr. Poppy, they embark on a Christmas journey like never before – but time is against them if they are to help Mr. Shepherd get to New York in time for his magical yuletide wedding…!

Written and directed by DEBBIE ISITT and produced by NICK JONES, NATIVITY 3 once again stars JASON WATKINS as the competitive Gordon Shakespeare and introduces CELIA IMRIE as the new Headteacher, with ADAM GARCIA as the scheming Bradley Finch and RALF LITTLE as Sophie’s brother.

To be in with a chance of winning, just answer this question in the competition form below: Which city is Mr. Shepherd due to get married to his beloved fiancée Sophie?

NATIVITY 3: DUDE, WHERE’S MY DONKEY? will be available on DVD, Blu-ray, 3 Disc Triple Pack DVD and Download from 2nd November 2015.

Tags:  Christmas Competition giveaway
This entry was posted on Tuesday, October 27th, 2015 at 11:00 am and is filed under Competitions. You can follow any responses to this entry through the RSS 2.0 feed. Both comments and pings are currently closed.