Having good tech habits could win you a Goji Wireless Bluetooth headset, thanks to Nationwide Building Society.

New research from Nationwide Building Society reveals that good money management is one of the most admired (17%) habits Brits have. The study looked at what the nation found to be its best and worst habits and the positive impact that technology has had on these habits forming. According to research, some 56% of Brits claim to have three plus bad habits. Our obsession with our phones has become so irritating that over three quarters (77%) of people hate it more than smoking (38%) and swearing (36%). 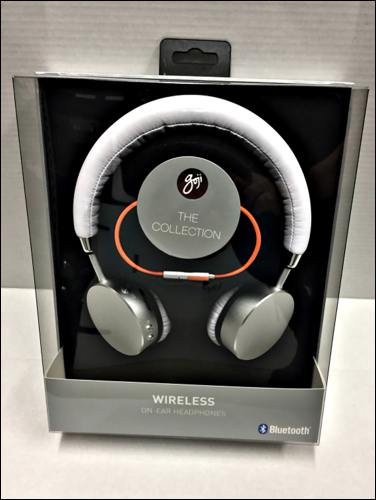 Convenience and the ability to self-learn were the top reasons why people felt behaviours became habits, and it can’t be denied that advances in technology has made our lives easier. The top five positive tech habits include shopping online (47%), using mobile banking (38%), checking balances regularly (34%), checking social media everyday (28%), and dual screening – multitasking using two devices (28%). Nationwide believes that technology has contributed to new habit forming in recent times, such as contactless payments, quick balance checks on banking apps and mobile technology such as Apple Pay and Android Pay. These have all given us easier access to our financial information than ever before.

To help celebrate our good tech habits and to experience contactless life like never before, Nationwide are giving away one Goji Wireless Bluetooth headset valued at £49.
These on-ear headphones is compatible with all smartphones, features a microphone and remote & volume control and comes with a detachable cable.

All you need to do is answer this simple question in the competition form below this post by midnight on 7th February 2017:

What is one of the most admired habits Brits have according to a new survey?
a) Good money management
b) Biting nails
c) FidgetingSave

This entry was posted on Sunday, January 8th, 2017 at 11:10 am and is filed under Competitions. You can follow any responses to this entry through the RSS 2.0 feed. Both comments and pings are currently closed.