Win 1 of 7 DK books All About Virtual Reality

With the explosion of virtual reality technology in recent years it has become easier than ever before to escape our everyday lives and be transported to new places or experiences. There’s a fascinating DK book out there about this called All About Virtual Reality (in association with CURiSCOPE) which includes 5 amazing VR experiences, stickers and a free VR viewer and is fun for both kids and parents alike. Seven London Mums have now the chance to get one in time for Christmas. Check details below on how to enter this great competition. 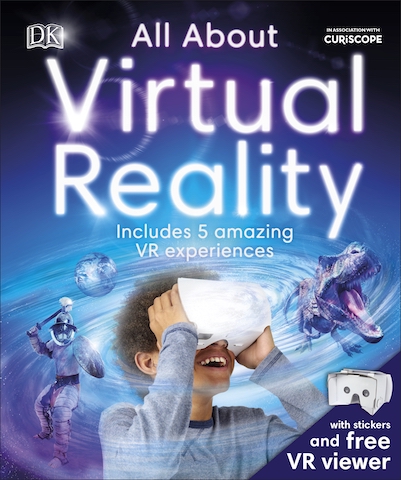 Virtual reality is fascinating as it takes us to places we cannot easily access. Whether it’s swimming under the sea, flying through space, visiting a time from the past or future, or exploring inside the human body. For curious kids seeking to learn more about the technology that makes this all possible, DK brings you All About Virtual Reality, a groundbreaking children’s book that explores the experience of virtual reality.

Made in association with CURiSCOPE, a virtual reality studio dedicated to inspiring and educating through incredible experiences, this cutting-edge book from DK explains everything there is to know about VR, and even comes with a VR viewer and smartphone app so that readers can experience the technology first-hand.

Learn about the history of VR, from how it was invented to how it is used in the world today – from aircraft simulators to sci-fi movies, and recent developments like the Oculus Rift. Find out how VR headsets play with your senses of sight, sound, and touch to fool you into thinking you are somewhere else.

Then use the included VR viewer and download the smartphone app to dive into five amazing experiences – come face-to-face with a T.Rex, look inside a volcano, explore the Roman Colosseum, hop aboard the International Space Station, and peek under the surface of a pond. All About Virtual Reality also comes with stickers that allow children to fully customise the included VR viewer.

Created by leading scientists and educators, this cutting-edge book from DK and Curiscope teaches children about VR in a way that is understandable and exciting, engaging future pioneers as they learn about this fascinating technology.

Curiscope was founded in 2016 to provide a lens into a side of the world that’s always there but not necessarily the one we always see. Whether you’re diving under the ocean or into the bloodstream, the world around us is full of magic. We build products to unlock this and fuel the curiosity that exists within all of us.

Ed Barton is Chief Executive Officer of CURiSCOPE. Ed has a background as a filmmaker (primarily in advertising) and as a web developer. At the age of 15 he founded one of the largest teen forums in the UK with close to 100 thousand members. Ed entered filmmaking as he believed it was a medium with which he could make a mark on the world but moved into the technology and VR industry as the potential impact felt greater. In 2016 Ed was named a Wired Innovation Fellow and was featured in Forbes 30 under 30 in 2017.

Ben Kidd is CPO of CURiSCOPE. Ben is a BAFTA nominated and PROMAX award winning 3d visual artist. One of the prominent technical 3D artists in the UK with over a decade in the industry working with companies like Nickelodeon, LEGO, Intel, Channel 4, BBC and notably, The Bloodhound SSC, land speed record project.

Jack Challoner is a former science and math teacher and educator at the London Science Museum. He is the author of over 40 science and technology books, including DK’s Home Lab and DK Eyewitness Books: Energy. He is based in Bristol, England.

For your chance to win one of these fantastic books, write the name of a place you would like to visit either in person or through virtual reality in the competition form below this post. Deadline to enter is midnight on 16 December 2017.

This entry was posted on Friday, November 17th, 2017 at 11:40 am and is filed under Competitions. You can follow any responses to this entry through the RSS 2.0 feed. Both comments and pings are currently closed.