For your chance to win 1 of 5 ‘Witch and Wizard: The Fire’ (released on 13 October 2011 – Published by Young Arrow in hardback, £9.99) books, email us the answer to the question below to info@londonmumsmagazine.com by 15 October 2011. REMEMBER THAT YOU NEED TO BE A REGISTERED MEMBER OF THE LONDON MUMS ORGANISATION TO WIN. IT’S FREE AND YOU CAN DO IT QUICKLY HERE https://londonmumsmagazine.com/wp-login.php?action=register 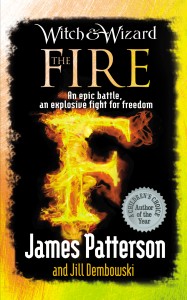 ‘Witch and Wizard: The Fire’ is released on 13 October Published by Young Arrow in hardback, £9.99.
‘An epic battle, an explosive fight for freedom’ (Amazon.com).

Harry Potter’s books might have come to an end, but here is James Patterson answer to a new generation of wizards.

The plot: Whit and Wisty Allgood have sacrificed everything to lead the Resistance against the merciless totalitarian regime that governs their world. Its supreme leader, The One Who Is The One, has banned everything they hold dear: books, music, art, and imagination. But the growing strength of the siblings’ magic hasn’t been enough to stop The One’s evil rampage, and now he’s executed the only family they had left.

Wisty knows that the time has finally come for her to face The One. But her fight and her fire only channel more power to this already formidable being. How can she and Whit possibly prepare for their imminent showdown with the ruthless villain who devastated their world – before he can become truly all-powerful?

In this stunning third instalment of the epic Witch & Wizard series, the stakes have never been higher – and the consequences will change everything.

The Question: What’s the name of the author of ‘Witch and Wizard: The Fire’?

This entry was posted on Thursday, October 6th, 2011 at 12:40 pm and is filed under Blog, Competitions. You can follow any responses to this entry through the RSS 2.0 feed. You can leave a response, or trackback from your own site.