Anybody who loves racing cars will love Tooned™, a really well made CG animated show featuring McLaren’s two World Champions, Lewis Hamilton and Jenson Button, who voiced their own characters, as well as the acclaimed British Actor and comedian Alexander Armstrong. The planned release date for the first Tooned DVD is 10th December 2012 and will be available at www.mclarenstore.com as well as reputable online and high street retailers. 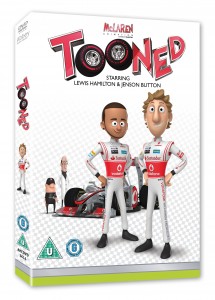 Ron Dennis, Executive Chairman of McLaren Group, said “‘Tooned’ is the result of extensive market research carried out by McLaren, which John Allert, our Group Brand Director, and I then analysed carefully together. It’s an exciting and creative concept that addresses the insights gleaned from our research in a very innovative way.

“I’m confident that the opportunities it presents will be extensive. Creating a more demographically accessible ‘face’ for McLaren will help our brand appeal to a wider audience whilst also fostering increased brand loyalty.

“McLaren has always aimed to be pioneering in everything it does. McLaren Animation’s remit and objectives are therefore consistent with, and complementary to, the ethos of continuous innovation on which the McLaren Group has been built.”

For your chance to win one of these amazing DVDs, answer the simple question below in our dedicated competition page (USE ONLY THE DEDICATED PAGE & DO NOT SEND MESSAGES OR DO NOT POST MESSAGES ON THE WEBSITE OR ON THIS PAGE AS THE ENTRY WON’T BE VALID – YOU WON’T BE NOTIFIED OF THE WRONG ENTRY) https://londonmumsmagazine.com/competition-area. The question is: ‘What’s the name of the Executive Chairman of McLaren Group?’ The deadline to enter is 15th December 2012.

If you are not convinced yet, check out the first episode. We love it!

McLaren Animation, which is a joint venture launched in partnership with the Oscar winning visual effects and animation studio Framestore, is structured under the corporate canopy of the McLaren Group, alongside McLaren Marketing, a company that has consistently broken new ground in racing since its formation in 1987.

Tags:  children DVD reviews Competition competitions dvd reviews win
This entry was posted on Thursday, November 29th, 2012 at 9:00 am and is filed under Blog, Competitions. You can follow any responses to this entry through the RSS 2.0 feed. You can leave a response, or trackback from your own site.