To win 1 of 5 copies of the DVD ‘DRIVER DAN’S STORY TRAIN’ email info@londonmumsmagazine.com what animal is the train driver by 20th September 2011. 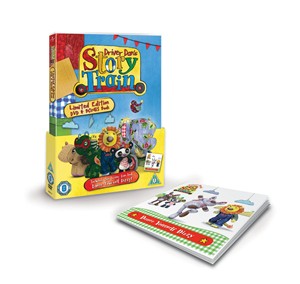 Driver Dan’s Story Train, created and designed by the respected children’s author Rebecca Elgar, will be available in a Limited Edition DVD, which also includes the Driver Dan storybook Dance Yourself Dizzy.

This is the perfect opportunity to join your little one as they watch and play along with all their Story Train friends in three story-play filled episodes from the hit TV series and accompanying storybook!

Actively sharing stories is at the heart of Driver Dan’s Story Train – encouraging children to pick up and engage with a storybook, explore the pictures, listen to it being read, sharing it with friends and family, re-imagining the story and ultimately reading it over and over again.

Shared time between parents and children and amongst children themselves is a wonderful outcome of engaging with Driver Dan and his friends and this first Driver Dan’s Story Train DVD and storybook pack is both appealing and entertaining. Story-Play time is Together Time!

The limited edition runs for approximately 35 minutes and includes:

This entry was posted on Saturday, September 3rd, 2011 at 2:45 pm and is filed under Blog, Competitions. You can follow any responses to this entry through the RSS 2.0 feed. You can leave a response, or trackback from your own site.