Ninja-go! Prepare your spinjitzu moves as The LEGO® NINJAGO® Movie is out now on Digital Download and arrives onto 4k Ultra HD™, Blu-ray™, 3D Blu-ray™ and DVD! To celebrate the release we are giving YOU the chance to win a copy on DVD! 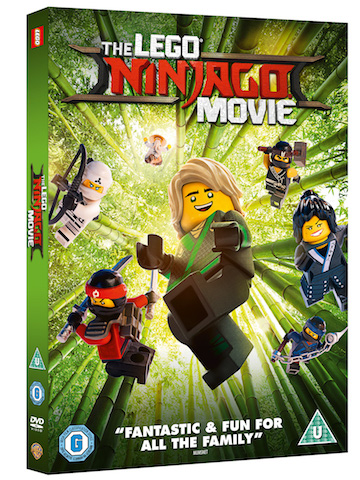 In the battle for NINJAGO® City, Lloyd (Dave Franco), high school student by day and Green Ninja by night, gets thrown into the ultimate adventure with his secret ninja warrior friends! Led by the wise and wisecracking Master Wu (Jackie Chan), they must defeat evil warlord Garmadon (Justin Theroux), The Worst Guy Ever, who also happens to be Lloyd’s dad. On their courageous journey, they learn to band together to unleash their inner power in an epic showdown to save the city.

For your chance to win a copy of The LEGO® NINJAGO® Movie on DVD simply answer the question below in the competition box below this post:

Which martial arts legend, who also voiced Monkey in the Kung Fu Panda films, stars as Master Wu in The LEGO® NINJAGO® Movie?

For further information on The LEGO® NINJAGO® Movie join us on Facebook, follow us @TheLEGOMoviesUK  #LEGONINJAGOMovie or visit https://www.warnerbros.co.uk/movies/the-lego-ninjago-movie

Own The LEGO® NINJAGO® Movie on Digital Download now and on 4k Ultra HD™, Blu-ray™, 3D Blu-ray™ and DVD.

This entry was posted on Monday, February 19th, 2018 at 1:40 pm and is filed under Competitions. You can follow any responses to this entry through the RSS 2.0 feed. Both comments and pings are currently closed.