Let us know what is your most memorable bedtime story for your chance to win this funny book, a brand new, laugh-out-loud, stinky story for fans of Roald Dahl and Horrid Henry! 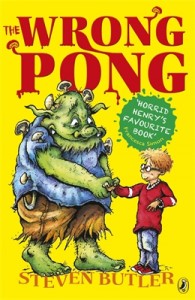 Get ready for a deliciously disgusting debut from one of the hottest new children’s writers. One night, Neville Brisket wakes up from a strange dream – a dream that there was a horrible, stumpy finger stuck up his nose. Then he finds his room in a mess, and his dog in the laundry basket… Neville goes to investigate – but his investigations end sploshily when he is whooshed down the toilet to the land of Underneath by mistake!

In a case of mistaken troll-dentity, Neville finds himself part of a disgusting new troll family. But will anybody help Neville get back to the land of Over, or will he be stuck eating rat patties and left sock stew forever?

This hilariously delivered tale will delight and disgust parents and children alike.

Steven Butler is a writer, actor, dancer and trained circus performer as well as a keen observer of trolls and their disgusting habits! Having trained at the Italia Conti Academy of Theatre Arts and The Toronto Circus School (in Aerial Ropes), he has starred in Peter Pan, Joseph and the Amazing Technicolor Dreamcoat, and as Henry in Horrid Henry Live and Horrid! His future as a writer was almost guaranteed when his primary school headmaster turned out to be the fantastically funny author Jeremy Strong! The Wrong Pong is Steven’s debut novel and before writing this he lived at sea for two years onboard the Disney Cruiseliner.

This entry was posted on Friday, May 27th, 2011 at 9:56 pm and is filed under Competitions. You can follow any responses to this entry through the RSS 2.0 feed. You can leave a response, or trackback from your own site.