Parenting and how mums and dads cope with kids and childcare during the summer months is going is a hot topic and come July, will be high on the agenda. Ever thought of hiring an au pair? That’s exactly what Jilly, a harassed mum of three, does in Janey Fraser’s new book THE AU PAIR – a hilarious romp through the world of unsuspecting families and foreign bodies. 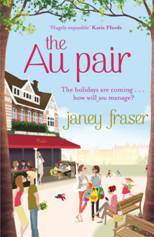 Janey herself went through no less than 6 au pairs in 18 months. Four didn’t like being in the middle of the country and two ran off with local boys.

For your chance to win one of these books, answer the simple question below in our dedicated competition page (USE ONLY THE DEDICATED PAGE & DO NOT SEND MESSAGES OR DO NOT POST MESSAGES ON THE WEBSITE OR ON THIS PAGE AS THE ENTRY WON’T BE VALID – YOU WON’T BE NOTIFIED OF THE WRONG ENTRY) https://londonmumsmagazine.com/competition-area. The question is: ‘What’s the name of ‘The Au Pair’ author?’ The deadline to enter is 20th July 2012.

Janey Fraser is the pen name for award-winning journalist Jane Bidder (who has also written five novels as Sophie King). Her previous novel THE PLAYGROUP was number two in the Heatseekers chart; was voted five star on Amazon; and had rave reviews by reviewers and authors including Fay Weldon who ‘couldn’t put it down’. She has written extensively for national magazines and newspapers and is also a renowned short story writer.

Tags:  au pair childcare
This entry was posted on Tuesday, June 26th, 2012 at 11:12 am and is filed under Blog, Books, Competitions. You can follow any responses to this entry through the RSS 2.0 feed. You can leave a response, or trackback from your own site.