From the creators of The Gruffalo and Room On The Broom, Julia Donaldson’s seasonal delight, Stick Man, is the latest story to be adapted for the small screen. Capturing the hearts and imaginations of children and adults alike since its publication in 2008, this adaptation of the timeless classic and Christmas hit will be available to own on DVD from the 1st February 2016 courtesy of Entertainment One. 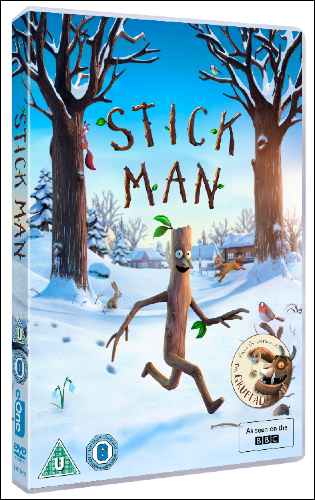 Stick Man is a wonderful and clever book published in 2008 by Scholastic Books, written by beloved children’s author Julia Donaldson and illustrated by Axel Scheffler. It’s one of the most popular titles in my household having read it many times over both in English and also in the Italian translation. The DVD is the truest visual medium to the original story and illustration. My son Diego and I went to see Stick Man on the stage in London and we enjoyed it a lot but this DVD is a great addition to the book and is always there to be watched at our convenience.

This magical animated special is voiced by a beloved cast of British acting talent including; Martin Freeman (The Hobbit, Sherlock) as Stick Man; Hugh Bonneville (Downton Abbey, Paddington) as Santa; Jennifer Saunders (Absolutely Fabulous, French and Saunders) as the narrator; with additional voice talent from Russell Tovey (The Moomins on the Riviera, Being Human); Rob Brydon (The Gruffalo, Gavin and Stacey) and Oscar© nominee Sally Hawkins (Paddington, Happy Go Lucky). 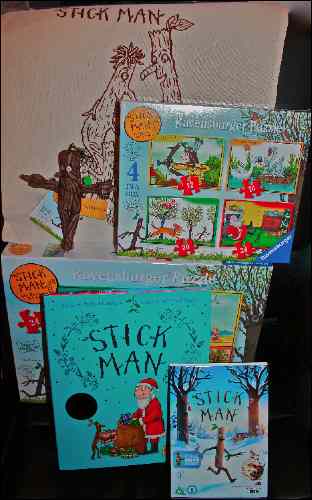 If you haven’t read this story, it’s about a Stick Man who lives in the family tree with his Stick Lady Love and their stick children three. One day Stick Man unintentionally ends up on an epic voyage across the country. His marathon adventure takes him across the seasons as he’s taken further away from home, encountering many obstacles on the way including an overzealous dog; being thrown into a river; escaping from a swan’s nest and even ending up on top of a fire. He’s not an ordinary stick, he’s Stick Man, he’s Stick Man, he’s Stick Man, you see. Will the Stick Man ever get back to his family tree?

A must-own for all the family, Stick Man arrives on DVD on 1st February 2016 courtesy of Entertainment One.

Stick Man is producer Magic Light’s fourth adaptation of a book from the UK’s bestselling picture book team. Room on the Broom, which premiered on BBC One Christmas 2012, received a 2014 Oscar© nomination and won a BAFTA©, an International Emmy© and an RTS© Award. Previously, Magic Light produced The Gruffalo and The Gruffalo’s Child, with the former winning over 15 awards as well as nominations for an Oscar©, a BAFTA© and the Cartoon D’Or© and delivered audiences of 10 million to BBC One for their respective Christmas Day transmissions.

For your chance to win one of these DVDs, write the name of the author of the popular book Stick Man in the competition form below this post. Deadline to enter is 1st March 2016. 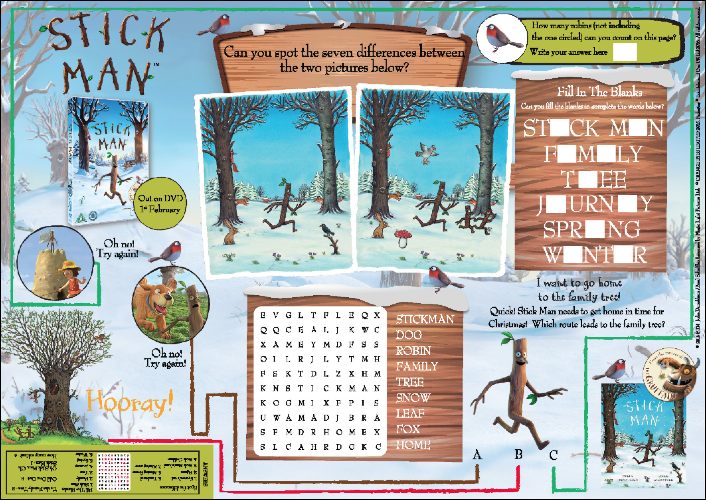 This entry was posted on Monday, February 1st, 2016 at 11:00 am and is filed under Competitions. You can follow any responses to this entry through the RSS 2.0 feed. Both comments and pings are currently closed.