WELCOME TO THE FURCHESTER HOTEL DVD IS ON SALE FROM MONDAY 28th SEPTEMBER 2015.

Check-in to The Furchester Hotel to laugh and learn with loveable friends like Elmo and Cookie Monster who are on an extended holiday to the UK from Sesame Street. Meet Elmo’s Aunt Funella, Uncle Furgus and cousin Phoebe in their ‘almost’ world-class hotel as this furry family solves the zany problems their guests bring to the establishment. Welcome to the Furchester Hotel is the series’ first DVD, featuring six episodes from the hit CBeebies show, and will be released by Abbey Home Media on Monday 28th September 2015. 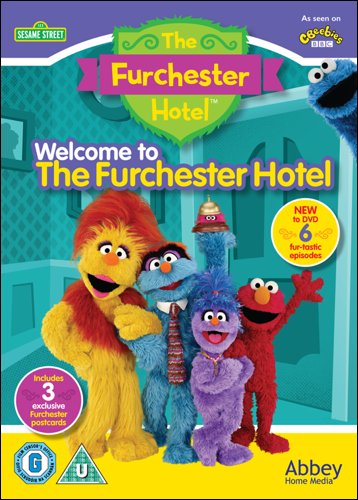 The Furchester Hotel is a series designed for 3 to 6-year-olds and is set in a ½-star rated hotel run by a close-knit family of cheerfully chaotic monsters. The series, which is designed to encourage creative problem-solving, is a co-production by Sesame Workshop, the non-profit educational organisation behind Sesame Street, and the In-House Production team at CBeebies,

Mr. Director and his assistant Carol are visiting The Furchester Hotel to shoot a video to promote the establishment and are very surprised when they find that it is run by monsters! Mr. Director follows the exciting escapades of the hotel and its residents, uncovering lots of unusual activities along the way.

Catastrophe strikes when the hotel runs out of cookies and Cookie Monster descends into panic. The arrival of Mr. Crumb, a living cookie, does little to help matters and responsibility falls to the Furchester Hotel team to ensure his safety whilst they wait for the cookie shipment.

The arrival of Pierce the Porcupine causes alarm amongst the hotels residents who fear his prickly appearance. Elmo and Phoebe relish the chance to make a new friend and ensure that Pierce has a fantastic stay at the Furchester.

A kerfuffle is caused when the hotels telephone ceases to work, calling for some creative thinking from the Furchester team. After trialing a series of tin can telephones, Furgus, Phoebe and Elmo turn to the hotel’s newest resident, Professor Fleece, for lessons in yodeling.

Local tour guide, Griff, turns to the Furchester team to watch his latest group, consisting of five chickens, whilst he fetches his bus from the garage. Following his departure, chaos descends across the hotel as the chickens disappear and the Tea Time Monsters run riot.

Funella hires The Veggietones to serenade the hotels guests, much to Elmo and Phoebe’s delight. The group’s initial performances cause concern amongst the guests but a helping hand from Furchester team ensures everyone is able to enjoy the show.

Check in to The Furchester Hotel and embrace a world of creative problem solving, songs and fur fuelled mayhem.

Available from all good DVD stockists

For your chance to win one of these funny DVDs, write in the competition form below your funniest fur-story, joke or anything furry you like. Deadline to enter is the 28th October 2015.

This entry was posted on Friday, September 25th, 2015 at 7:05 pm and is filed under Competitions. You can follow any responses to this entry through the RSS 2.0 feed. Both comments and pings are currently closed.