Re-mastered and released for the first time on DVD, Mister Corbett’s Ghost is a chilling, Dickensian cautionary tale of revenge starring John Huston in his final acting role as the Soul Collector. The film also features the excellent Paul Scofield as Mr Corbett as well as cameo appearances from Burgess Meredith (Rocky), Jools Holland and Alexei Sayle. 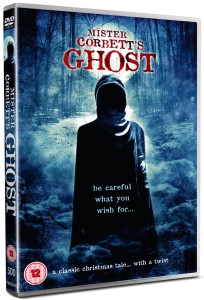 Based on Leon Garfield’s classic ghost story, Mr Corbett’s Ghost tells the tale of Benjamin Partridge (Mark Farmer), an apothecary’s apprentice who wishes for nothing more than the death of his hated master, Mr Corbett (Paul Scofield) so that he can spend New Year’s Eve with his friends. Benjamin believes that his prayers have been answered when he meets a mysterious old man (John Huston) who makes a deal with him that is seemingly too good to be true. Sure enough Mr Corbett meets an untimely death, but the tables turn on the terrified apprentice who finds himself cursed with the ghost of the man he hated most in the world.

Much loved since its first television broadcast in 1987, this new DVD release of Mister Corbett’s Ghost is perfect family viewing for those who like a dark twist to a classic Christmas tale.

For your chance to win one of these DVDs, answer the simple question below in our dedicated competition page (USE ONLY THE DEDICATED PAGE & DO NOT SEND MESSAGES OR DO NOT POST MESSAGES ON THE WEBSITE OR ON THIS PAGE AS THE ENTRY WON’T BE VALID – YOU WON’T BE NOTIFIED OF THE WRONG ENTRY) https://londonmumsmagazine.com/competition-area. The question is: ‘What’s the name of the main Hollywood actor starring in this classic dark Christmas tale?’ The deadline to enter is 7th December 2012.

Tags:  Christmas christmas movies competitions
This entry was posted on Monday, November 12th, 2012 at 9:30 am and is filed under Blog, Competitions. You can follow any responses to this entry through the RSS 2.0 feed. You can leave a response, or trackback from your own site.