Win 1 of 5 copies of Masha and the Bear DVDs

London Mums are partnering with Abbey Home Media to offer copies of the latest DVD from the hugely popular Masha and the Bear TV series, Holiday on Ice. A perfect stocking filler this Christmas!

More tales of fun, friendship and adventure are set to enchant fans of Masha and the Bear everywhere, with the release of the loveable duo’s third DVD collection by Abbey Home Media. 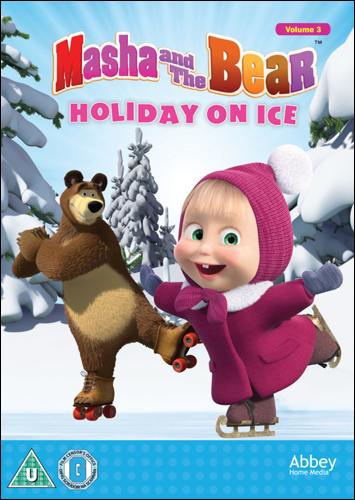 A retired circus bear settles into the woods and prepares for a quiet new life surrounded by peace and tranquility until he is introduced to an adventurous little girl named Masha. Masha is an energetic three-year-old who lives in an old train station in the forest. Precocious, silly, and friends with everyone she meets, this energetic girl can’t seem to keep herself out of trouble.

Bear is a warm, fatherly figure that does his best to guide his friend and keep her from harm, often ending up the unintended victim of her misadventures. Together with a loveable group of friendly animals that have made the forest their home, Masha and the Bear entertains adults and children alike, teaching viewers about creativity, loyalty and true friendship.
In this special, seasonal collection, eager to learn how to skate like a pro, Masha gets Bear to teach her. With a bit of effort, Masha gets Bear down to the frozen lake where Lady Bear is already. Hopefully Bear and Lady Bear can help Masha learn the steps.

The Snow Maiden and The Wolf and the Fox.


For your chance to win one of these DVDs, write the name of your favourite character in Masha and the Bear  in the competition form below this form. Deadline to enter is 8 January 2017.

This entry was posted on Thursday, December 8th, 2016 at 3:43 pm and is filed under Competitions. You can follow any responses to this entry through the RSS 2.0 feed. Both comments and pings are currently closed.