We have 5 copies of ‘Frozen’ The Original Motion Picture Soundtrack – which features a recording by Demi Lovato – to give away. Frozen OST is out to buy on 2nd December 2013 from Walt Disney Records and includes music and songs from the festive new movie from Disney. 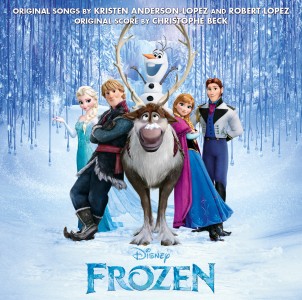 For your chance to win one of these amazing CDs, answer the simple question below in our dedicated competition page (USE ONLY THE DEDICATED PAGE & DO NOT SEND MESSAGES OR DO NOT POST MESSAGES ON THE WEBSITE OR ON THIS PAGE AS THE ENTRY WON’T BE VALID – YOU WON’T BE NOTIFIED OF THE WRONG ENTRY) https://londonmumsmagazine.com/competition-area. The question is: ‘What’s the name of the singer featured in the FROZEN Soundtrack?’ The deadline to enter is 15th December 2013.

Walt Disney Animation Studios’ “Frozen” hits a high note with details of its dynamic soundtrack featuring eight original songs from Kristen Anderson-Lopez (“In Transit,” “Winnie the Pooh”) and Tony® Award-winning songwriter Robert Lopez (“Avenue Q,” “The Book of Mormon”), plus a phenomenal score by the composer of last year’s Oscar®-winning short “Paperman,” Christophe Beck. The original motion picture soundtrack, which features the end-credit recording of “Let It Go” by Demi Lovato, is available for sale on Dec. 2, 2013. Directed by Chris Buck (“Tarzan,” “Surf’s Up”) and Jennifer Lee (screenwriter, “Wreck-It Ralph”), who also wrote the screenplay, and produced by Peter Del Vecho (“Winnie the Pooh,” “The Princess and the Frog”) “Frozen” hits cinemas in the UK on 6th December 2013.

According to Del Vecho, the original music adds to both the emotional story and the humour within this high-action comedy adventure. “Jennifer, Chris and the team have created a film with an engaging setting full of compelling characters,” he said. “The music elevates and propels this storytelling. The songwriters Kristen and Bobby participated in the creation of the story. We met with them for two hours each day via video conference while we were building our plot—not necessarily about the songs, but about the characters: who they are, how they think, what they want. Each song enhances and expands the story in a way that fully engages the audience in this world.”

The Book of Lopez

Anderson-Lopez and Lopez contributed eight original songs to the film—each with the responsibility to propel the story in a specific way. The defining moment for the film’s music, said Lopez, was a song written early in the process called “Let It Go.” “That was our lynchpin,” he said. “We wanted to write the biggest, beltiest diva number we could channel because we knew we had Idina Menzel—who just knocks it out of the park—and we knew her character Elsa was experiencing something epic in her life.”

The song resonated with filmmakers—so well, in fact, that it made them rethink scenes leading up to the moment. “‘Let It Go’ was the first song that we all knew belonged in the film because it helped shape Elsa’s character,” said Lee. “It delivers such a poignant and powerful message about how she’s feeling that we needed to back up and earn that song—to show how she finds herself in that place at that time.”

Platinum-selling recording artist Demi Lovato (“DEMI”) recorded a version of the song for end credits, which is available today on iTunes. “It’s so relatable,” said Lovato of the song. “Elsa is finding her identity; she’s growing into who she is and she’s finally accepting her own strength and magical powers. Instead of hiding it, like she’s done all her life, she’s letting it go and embracing it.”

Lovato’s fans were the first to hear her version of the song by creating a Social Snowstorm on Monday. Lovato encouraged fans to post #FrozenDemi, and within 10 minutes, the hashtag trended worldwide. Two hours later, the hashtag was used more than 300,000 times, officially unlocking the single (Disney.com/DemiFrozen).

Lopez and Anderson-Lopez infused their signature sense of humour into the film’s other songs, including the character-shaping song for Anna, “For the First Time in Forever.” “This particular song was a tough nut to crack, because it had to do a lot of things,” said Anderson-Lopez. “It had to introduce Anna as an optimistic, active person, but also as someone with a need to be filled over the course of the movie.” The song ultimately illustrates Anna’s desire for connection, while showcasing just how far apart she is from big sister Elsa, who’s consumed by fear. Performed by Kristen Bell and Menzel, the song also introduces audiences to the kingdom of Arendelle.

Olaf gets his moment in the sun with the laugh-out-loud song “In Summer,” in which the affable snowman shares his dream of spending a day in his curiously favorite season. Josh Gad, who counts Lopez’ “The Book of Mormon” among his own credits, brings the song—and the snowman—to life.

Other songs include “Frozen Heart,” “Do You Want to Build a Snowman?” “Love Is an Open Door,” “Reindeer(s) Are Better Than People” and “Fixer Upper.”

Composer Christophe Beck, whose diverse talents are evident by a resume that includes the Oscar®-winning “Paperman” and the “Hangover” trilogy, provided an epic score for “Frozen.” “The people at Disney really value music,” said Beck. “And in animation, versus live action, the music is really integral to the storytelling—it does some of the heavy lifting when it comes to communicating the emotion.”

Beck paid homage to the Norway-inspired setting, referencing regional instruments such as the haunting bukkehorn and vocal techniques like kulning, which is a traditional shepherd’s herding call. “With ‘Frozen,’” he said, “we had the setting to draw from—these incredible icy snowy vistas, which are very evocative. The region provided us with lots of really cool and interesting sound to explore that I’d never heard—I don’t think many people outside of the region have either.”

Filmmakers recruited a Norwegian linguist to help with the lyrics for an Old Norse song written for Elsa’s coronation. And the team even travelled to Norway to record the all-female choir Cantus for a piece inspired by traditional Norwegian music. The score, which was recorded by a full 80-piece orchestra, features 32 vocalists—including native Norwegian Christine Hals, whose rural upbringing inspired her kulning skills. Beck worked with Lopez and Anderson-Lopez on some of the songs’ arrangements and in incorporating their melodies in the score, often doing so in a unique, but recognizable context. According to Buck, the collaboration went even further for “Do You Want to Build a Snowman?” “The song reflects Anna’s side of the story—which is sung by Kristen Bell, Agatha Lee Monn and Katie Lopez as Anna, and written by Bobby and Kristen—and Elsa’s side, which is represented by Christophe’s score. It is all woven together beautifully,” said the director. “And the melody returns at the end of the film in a really grand and moving way.”

“Our goal,” added Beck, “was to create a cohesive musical journey from beginning to end.”

The “Frozen” soundtrack, set for release from Walt Disney Records on Dec. 2, 2013, is available for pre-order. The “Frozen” two-disc deluxe edition and the digital deluxe edition soundtrack, which are also available on the same date, feature 23 and 27 additional tracks respectively, including demos, outtakes and a “Let It Go” instrumental karaoke track.

“Do You Want to Build a Snowman?” Performed by Kristen Bell, Agatha Lee Monn and Katie Lopez“

“Reindeer(s) Are Better Than People” Performed by Jonathan Groff

“In Summer” Performed by Josh Gad

We Were So Close Score

Only An Act of True Love Score

Some People Are Worth Melting For Score

Demi Lovato recently announced her headlining arena Neon Lights Tour. Produced and promoted by Live Nation, the North American tour kicks off Feb. 9, 2014, supporting her latest album and will visit 27 cities across the United States and Canada. “DEMI,” the 4th album from Demi Lovato on Hollywood Records, is out now and features the chart-topping, double platinum-certified single “Heart Attack” and “Neon Lights.” The album hit #1 on iTunes in 50 countries and debuted at #3 on the Billboard 200 chart in the U.S. “Heart Attack” reached #5 on the Billboard Top 40 Radio chart and became the 3rd Top 10 hit of Demi’s career. The video for the song has amassed over 100 million views on VEVO, while a remix of the single also hit #1 on the Billboard Dance Chart. Lovato has also joined the Emmy Award®-winning show “Glee” for a guest starring role, which began airing Oct. 3. Earlier this month, she returned for her second season as a judge and mentor on“The X Factor.” On Nov. 19, Lovato releases her first book, “Staying Strong 365 Days a Year.”

This entry was posted on Thursday, November 28th, 2013 at 9:00 am and is filed under Competitions. You can follow any responses to this entry through the RSS 2.0 feed. You can leave a response, or trackback from your own site.