Win 1 of 5 copies of DRAGONS: RIDERS OF BERK DVD 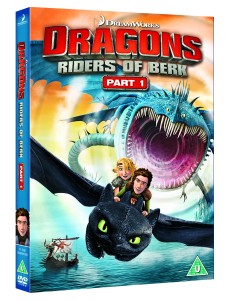 Following on from the huge success of How To Train Your Dragon, Hiccup, Toothless and all your favourite Vikings continue their nonstop high-flying action in their new quest to get the Vikings of Berk living in harmony with the dragons. Hiccup soon learns that the co-habitation is going to be far from easy, with Viking ignorance and the Dragons’ natural instincts threatening to destroy the alliance. In an attempt to solve the problem, Hiccup’s father, Stoick the Vast, decides to organise the Berk Dragon Academy where his son and friends can learn all about Dragons, however it quickly becomes clear not all dragons are able to be trained.

For your chance to win one of these amazing DVDs, answer the simple question below in our dedicated competition page (USE ONLY THE DEDICATED PAGE & DO NOT SEND MESSAGES OR DO NOT POST MESSAGES ON THE WEBSITE OR ON THIS PAGE AS THE ENTRY WON’T BE VALID – YOU WON’T BE NOTIFIED OF THE WRONG ENTRY) https://londonmumsmagazine.com/competition-area. The question is: ‘What’s the name of Ugly Betty’s star who is voicing one of this movie’s characters?’ The deadline to enter is 20th November 2013.

If you like Dragons check our Famous Dragons in Films feature.

This entry was posted on Tuesday, October 22nd, 2013 at 1:42 pm and is filed under Competitions. You can follow any responses to this entry through the RSS 2.0 feed. You can leave a response, or trackback from your own site.