Forget the Jurassic era; don’t even think about the Cretaceous era – it’s time for Buddy and his friends to take you on a journey to the ‘Spooky era’ in an exciting Dinosaur Train adventure! 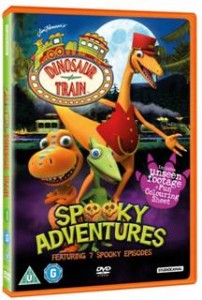 From the producers of The Muppet Show, Dinosaur Train embraces and celebrates the fascination pre-schoolers have with both dinosaurs and trains while sparking an interest in life science, natural history and palaeontology.

Dinosaur Train is one of Nick Jr’s most popular shows and stars Buddy the world’s cutest T-Rex, who, with his friends, jump on the Dinosaur Train and circle the world to meet, explore and have adventures with all kinds of dinosaurs.

Buddy is especially curious about the differences between species and vows to learn what makes each dinosaur special by riding the Dinosaur Train.

For your chance to win one of these amazing DVDs, answer the simple question below in our dedicated competition page (USE ONLY THE DEDICATED PAGE & DO NOT SEND MESSAGES OR DO NOT POST MESSAGES ON THE WEBSITE OR ON THIS PAGE AS THE ENTRY WON’T BE VALID – YOU WON’T BE NOTIFIED OF THE WRONG ENTRY) https://londonmumsmagazine.com/competition-area. The question is: ‘What’s the name of another show produced by the producers of Dinosaur Train?’ The deadline to enter is 25th October 2012.

Dinosaur Train – Spooky Adventures is made up of 7 x 14 min spooky episodes, each with an educational objective.

Night Train: Dad, Buddy and Tiny take a special spooky “Night Train” ride on the Dinosaur Train at night, learning about nocturnal animals that are active after dark, culminating at the Big Pond for a spooky scavenger hunt under the full moon.

Fossil Fred: Buddy, Tiny and Don play “detective” and search around the Big Pond for fossils. The kids end up finding an entire skeleton of a Jurassic dinosaur!

A Frill a Minute: Our kids help Tank Triceratops overcome his awkwardness of having a huge head by showing him how cool and amazing his features are, especially his frill.

T.Rex Teeth: When Buddy loses a tooth, Mum takes him to Rexville to ask his Tyrannosaurus friends all about T. rex teeth. They explain that he’ll grow new teeth to replace the old ones.

Laura the Giganotosaurus: Buddy spends time with Laura Giganotosaurus, a large dinosaur who always rides the Dinosaur Train and, like Buddy, is a three-toed theropod! Buddy also discovers that Laura is an avid bird-watcher.

A Spiky Tail Tale: Buddy and Tiny help settle an argument between Morris Stegosaurus and Alvin Allosaurus, two very big dinosaurs – one with a very spiky tail, the other with a mouthful of sharp teeth.

One Big Dinosaur: Tiny and Buddy visit a dinosaur family called Argentinosaurus, some of the biggest land creatures ever! The kids find out there are great things about being really

Tags:  Competition competitions win win win
This entry was posted on Friday, September 28th, 2012 at 12:04 pm and is filed under Blog, Competitions. You can follow any responses to this entry through the RSS 2.0 feed. You can leave a response, or trackback from your own site.