Win 1 of 5 copies of ‘CHICAGO FIRE: SEASON ONE’ DVD 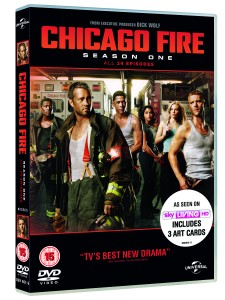 From the Emmy-award® winning producer, who brought you Law & Order, comes the explosive new drama, Chicago Fire. Follow the lives of Chicago’s finest fire and rescue team, as Season One bursts on to Blu-ray and DVD from 14 October 2013 from Universal Pictures (UK).

Already renewed for a second season on Sky Living, the compelling hit series gives an up-close and personal view into the lives of everyday heroes, following the adventures of the men and women of Chicago Firehouse 51.

In their hands lies the power to make a difference between life and death! Boasting a skilled and accomplished cast, including Jesse Spencer (Neighbours, House) as strong and intuitive lieutenant Matthew Casey; Taylor Kinney (The Vampire Diaries, Zero Dark Thirty) as tortured Kelly Severide; Eamonn Walker (ER, Oz) as battalion Chief Wallace Boden; Monica Raymund (Arbitrage, The Good Wife) as fast-thinking paramedic Gabriela Dawson; Lauren German (Hawaii Five-O, A Walk to Remember) as her partner Leslie Shay; Charlie Barnett (Law & Order, Men in Black 3) as academy graduate Peter Mills; Terri Reeves (Battleground, Rules of Engagement) as hospital resident Hallie Thomas and David Eigenberg (Sex and the City, Criminal Minds) as veteran fire fighter Christopher Hermann. No job is more stressful, dangerous or exhilarating than those of the firefighters, rescue squad and paramedics of Chicago Firehouse 51. These are the courageous men and women who forge headfirst into danger when everyone else is running the other way.

But the enormous responsibilities of the job also take a personal toll. With big reputations and hefty egos, the pressure to perform and make split-second decisions is bound to put the squad members at odds. When it’s “go-time” though, they put their differences aside and everything on the line for each other.

Featuring three limited art cards in-pack and a hot, young cast packed with edge-of-your-seat suspense, drama, and thrills, Chicago Fire: Season One is the must-own DVD set this autumn! Ignite your newest guilty pleasure as it comes to Blu-ray and DVD from 14 October 2013 courtesy of Universal Pictures (UK).

For your chance to win one of these amazing DVDs, answer the simple question below in our dedicated competition page (USE ONLY THE DEDICATED PAGE & DO NOT SEND MESSAGES OR DO NOT POST MESSAGES ON THE WEBSITE OR ON THIS PAGE AS THE ENTRY WON’T BE VALID – YOU WON’T BE NOTIFIED OF THE WRONG ENTRY) https://londonmumsmagazine.com/competition-area. The question is: ‘What’s the name of Lady Gaga’s boyfriend who stars in this film?’ The deadline to enter is 5th November 2013.

This entry was posted on Friday, October 11th, 2013 at 2:07 pm and is filed under Competitions. You can follow any responses to this entry through the RSS 2.0 feed. You can leave a response, or trackback from your own site.