Win 1 of 5 copies of AFTER EARTH DVD

Jaden Smith & Will Smith Star in the Action Adventure AFTER EARTH. The DVD is Landing on Blu-ray™ and DVD with UltraViolet™ this October. 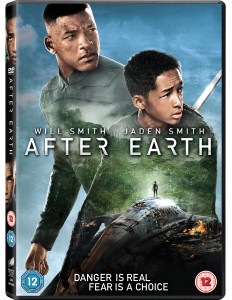 Experience the post-apocalyptic world when Sony Pictures Home Entertainment releases AFTER EARTH on Blu-ray™ and DVD with Ultraviolet™ on October 14th. Starring Jaden Smith (The Karate Kid) and two-time Academy Award® nominated Will Smith (2006, Best Actor, The Pursuit of Happyness; 2001, Best Actor in a Leading Role, Ali), this action-adventure follows Kitai Raige (Jaden Smith) and his father Cypher (Will Smith), as they set out on a routine mission that crash lands them on a hostile planet Earth. Now, 1,000 years after Earth has been quarantined, everything on the planet has evolved to kill humans. Unable to contact home, and forced to battle exotic creatures and dangerous terrains, Kitai and Cypher must fight together to survive.

The AFTER EARTH Blu-ray and DVD both come with all-new featurettes, including exciting behind-the-scenes looks at the making of the film. Exclusive to the Blu-ray are three bonus featurettes, including “Building a World,” “Pre-Visualizing the Future,” and “The Animatics of After Earth” – glimpses into the unique approaches taken to create the After Earth universe. The Blu-ray also comes with a never-before-seen version of the film’s opening sequence.

A crash landing leaves teenager Kitai Raige (Jaden Smith) and his legendary father Cypher (Will Smith) stranded on Earth, 1,000 years after cataclysmic events forced humanity’s escape. With Cypher critically injured, Kitai must embark on a perilous journey to signal for help, facing uncharted terrain, evolved animal species that now rule the planet, and an unstoppable alien creature that escaped during the crash. Father and son must learn to work together and trust one another, if they want any chance of returning home.

For your chance to win one of these amazing DVDs, answer the simple question below in our dedicated competition page (USE ONLY THE DEDICATED PAGE & DO NOT SEND MESSAGES OR DO NOT POST MESSAGES ON THE WEBSITE OR ON THIS PAGE AS THE ENTRY WON’T BE VALID – YOU WON’T BE NOTIFIED OF THE WRONG ENTRY) https://londonmumsmagazine.com/competition-area. The question is: ‘What’s the name of the main star of this movie?’ The deadline to enter is 20th November 2013.

AFTER EARTH has a run time of approximately 95 mins and is rated 12.

“Academy Award®” is the registered trademark and service mark of the Academy of Motion Picture Arts and Sciences.

This entry was posted on Tuesday, October 22nd, 2013 at 11:11 am and is filed under Competitions. You can follow any responses to this entry through the RSS 2.0 feed. You can leave a response, or trackback from your own site.