If your best friend mysteriously disappeared without a trace, how far would you go to find out what happened to her? A simple favour sees Anna Kendrick (Pitch Perfect, Into the Woods) star opposite Blake Lively (Age of Adaline, Gossip Girl) in this year’s most stylish thriller, which is available for digital download and on DVD, Blu-Ray™ and 4K UHD now, courtesy of Lionsgate Home Entertainment UK.

Keep your friends close… and your secrets closer. 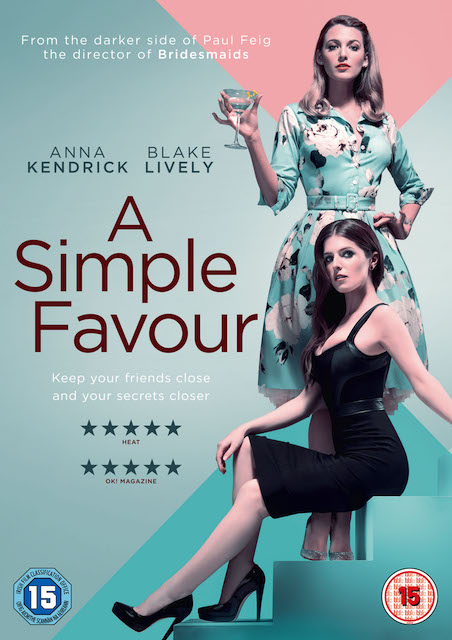 For your chance to win a copy of A simple favour DVD, subscribe to the London Mums YouTube channel and write the name of the actress (starring in this film) who voiced a character in the animation London Mums magazinealongside Justin Timberlake (who was featured in the London Mums magazine) in the competition form below this post.  Deadline to enter is midnight on 5th March 2019.

Based on the novel by Darcey Bell, A simple favour centres around Stephanie (Anna Kendrick), a mummy vlogger who seeks to unearth the truth behind the sudden disappearance of her best friend Emily Nelson (Blake Lively). Alongside Emily’s husband Sean (Henry Golding; Crazy Rich Asians), Stephanie quickly finds herself in a high-stakes game of lies and deception as she realizes she may have never known Emily at all. Brought to you by the award-winning director of Bridesmaids,Paul Feig, with executive producers Jason Cloth (The Spy Who Dumped Me) and Mike Drake (Nightmare On Elm Street), and screenplay by Jessica Sharzer (American Horror Story), A simple favour delivers a punchy, uncompromised plot rich with intrigue and suspense. As we follow Stephanie in pursuit of the truth, we learn that secrets can save you – or kill you.

With more than 12 engrossing special features across Blu-Ray™ and 4K UHD formats, the electrifying A simple favour is the ultimate fix for thriller fans this January.

6 Featurettes (with an additional 2 features on the 4K UHD)

This entry was posted on Friday, January 25th, 2019 at 11:10 am and is filed under Competitions. You can follow any responses to this entry through the RSS 2.0 feed. Both comments and pings are currently closed.