Win 1 of 4 copies of ‘Something Special: How are you Mr Tumble?’ DVDs

This Spring, BBC Worldwide presents a brand new DVD packed with eight episodes of the award-winning BBC TV Series Something Special. Something Special: How are you Mr Tumble? is the fifth DVD available for fans of the beloved Mr Tumble and friends and features episodes that can be enjoyed again and again. 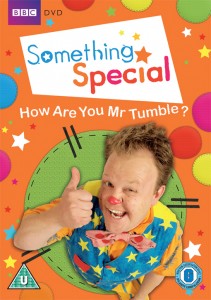 For your chance to win one of these amazing DVDs, answer the simple question below in our dedicated competition page (USE ONLY THIS DEDICATED PAGE – DO NOT SEND MESSAGES AND DO NOT POST MESSAGES ON THIS WEBSITE AND/ OR ON THIS PAGE AS YOUR ENTRY WON’T BE VALID) https://londonmumsmagazine.com/competition-area. The question is: ‘What’s the real name of Mr Tumble?’ The deadline to enter is 20th May 2012.

Something Special: How are you Mr Tumble? is presented by Justin Fletcher and features eight episodes from Something Special, the inclusive magazine show broadcast daily on CBeebies. Each episode focuses on everyday aspects of young childrens’ lives and features clowning and tomfoolery from the irrepressible Mr Tumble and his friends Lord Tumble, Aunt Polly and Granddad Tumble.

Something Special is a phenomenally popular show that will be familiar to parents and pre-schoolers up and down the country. Using Makaton – a language using signs and symbols to help people communicate – the series was originally devised for children with learning and communication difficulties but has become a huge hit with all pre-school viewers. In these episodes – brand new to DVD – Justin and his friends set off on exciting quests including a trip to the Forest of Dean and a sleepover in Mr Tumble’s garden.

Tags:  children DVD reviews Competition competitions dvd reviews Justin Fletcher something special win
This entry was posted on Sunday, April 22nd, 2012 at 8:55 pm and is filed under Blog, Competitions. You can follow any responses to this entry through the RSS 2.0 feed. You can leave a response, or trackback from your own site.