From the writer of Doctor Who and Torchwood comes a brand new series, Wizards Vs Aliens, available on DVD and Blu-Ray from 31 December 2012, as well as on iTunes from 6 November 2012, courtesy of FremantleMedia Enterprises. 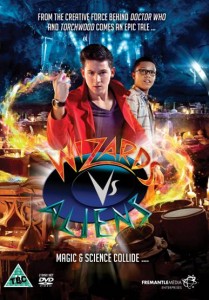 The CBBC’s ratings smash adventure series follows Tom Clarke (Scott Haran), a seemingly normal 16-year-old boy who loves football. However, Tom is far from ordinary as his family are wizards! His secret seems safe, until the alien Nekross arrives on Earth hungry for magic and keen to cause chaos…

With the help of his friend and science super-brain, Benny (Percelle Ascott), Tom takes on the challenge of stopping the evil alien attackers. Will the two unlikely heroes be able to succeed, or will Nekross devour all the magic of Earth with disastrous results?

Jam-packed with bonus features including deleted scenes, hilarious outtakes and a picture gallery, the DVD and Blu-Ray provide hours of entertainment for all the family to enjoy.

If you can’t wait to catch up an all the action, every episode will be available on iTunes eight days after airing. So, whether you missed an episode, or just want to re-live the adventure, the whole series will be online to download as you go along.

For your chance to win one of these amazing DVDs, answer the simple question below in our dedicated competition page (USE ONLY THE DEDICATED PAGE & DO NOT SEND MESSAGES OR DO NOT POST MESSAGES ON THE WEBSITE OR ON THIS PAGE AS THE ENTRY WON’T BE VALID – YOU WON’T BE NOTIFIED OF THE WRONG ENTRY) https://londonmumsmagazine.com/competition-area. The question is: ‘What’s the name of the TV channel where this series run?’ The deadline to enter is 10th January 2013.

Can’t wait to win?!
Pre-order your copy now from the following outlets:

Tags:  children DVD reviews Competition win
This entry was posted on Thursday, December 6th, 2012 at 9:00 am and is filed under Blog, Competitions. You can follow any responses to this entry through the RSS 2.0 feed. You can leave a response, or trackback from your own site.