Win 1 of 3 prize bundles with ODDBALL AND THE PENGUINS

The heartwarming and hilarious family film ODDBALL AND THE PENGUINS is unleashed in cinemas on 12 February 2012 and, to celebrate, we’ve got three bundles of goodies to give away!

Guaranteed family fun for this half term, ODDBALL AND THE PENGUINS is based on the incredible true story of an eccentric Australian chicken farmer who, with the help of his granddaughter, trains his mischievous Maremma sheepdog Oddball to protect a wild penguin sanctuary from fox attacks, and in the process tries to reunite his family and save their seaside town. 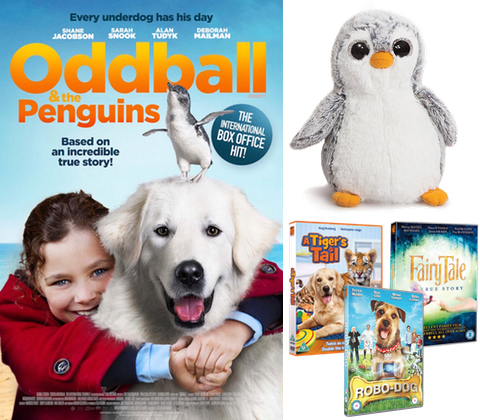 London Mums have three prize bundles to give away, each containing A Tiger’s Tail, Robo-Dog and Fairy Tale: A True Story on DVD, plus an adorable plush penguin toy!

For your chance to win, just answer the following question in the competition form below this post:

What kind of animal is Oddball?

A homegrown hit at the Australian box office, ODDBALL AND THE PENGUINS is based on a true story and was shot entirely on the beautiful Australian coast near Melbourne, and features up-and-coming Australian star Shane Jacobson (“Kenny”), Sarah Snook (“Steve Jobs”, “Predestination”) and Alan Tudyk (“Frozen”, “I, Robot”, “Death at a Funeral”).
Off the coast from the small town of Warrnambool lies Middle Island, a sanctuary once home to thousands of the world’s smallest penguins. But since foxes learned to cross the shallow channel to the island, penguin numbers have plunged. And if they fall below ten, park ranger Emily Marsh will be out of a job. This shocks her father, eccentric chicken farmer Swampy Marsh. His wife ran the sanctuary, but when she passed away, Emily stepped in, while Swampy retreated to his farm. Emily’s nine-year-old daughter Olivia is the glue that keeps the family together.

And at the centre of everything is Oddball, Swampy’s rambunctious Maremma sheepdog. After Oddball goes on an off-leash run that nearly destroys Main Street, tensions rise. If the sanctuary closes, Emily plans to take Olivia and move away with Bradley, an American tourism consultant. So now Swampy might lose his daughter and granddaughter as well.

The solution comes when Swampy rescues an injured penguin from the island and discovers to his amazement that Oddball – who can’t bring himself to guard chickens – is an expert at guarding penguins. With two weeks until the final penguin count, Swampy and Olivia devise a crazy plan – train the rambunctious and unpredictable Oddball to protect the penguins and save the sanctuary, while somehow keeping the operation a secret from everyone.

Will Emily discover the truth? What about the suspicious Dogcatcher? And who is the shadowy person trying to make sure the sanctuary closes?

What follows is a rousing adventure as Oddball, Swampy and Olivia manage to save the penguin preserve, their family and the town itself.

This entry was posted on Friday, February 12th, 2016 at 11:00 am and is filed under Competitions. You can follow any responses to this entry through the RSS 2.0 feed. Both comments and pings are currently closed.