Win 1 of 3 copies of the HOTEL TRANSYLVANIA DVD

HOTEL TRANSYLVANIA is out on DVD! Grab your chance of a free copy here!!! 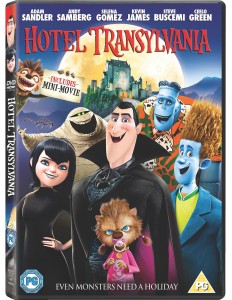 On Blu-ray™ 3D, Blu-ray™ and DVD with UltraViolet™ 4 February 2013 from Sony Pictures Animation and Director Genndy Tartakovsky featuring the Voices of Adam Sandler, Andy Samberg, Selena Gomez, Kevin James and Steve Buscemi.
We did not know what to expect from this movie at the screening at the National Geographic Shop (Knightsbridge) recently, but we were positively surprised as HOTEL TRANSYLVANIA can be enjoyed by both parents and children (which is quite unusual as kids’ movies are not always interesting for adults). I would dare say that the humour in this movie can be read on two different levels. The kids would laugh about the funny monsters while the adults are charmed about some subtle lines such as Dracula’s daughter Mavis about to become 118 and she tells her dad: ‘Don’t treat me like a baby, I am not 83 any more!’. Most kids were fascinated by the Invisible Man and all his jokes (interesting! as he was invisible). The film tells about their life inside a remote hotel that caters to monsters of all kinds.

Dracula wants to throw a party strictly for monsters for his daughter Mavis’ 118 birthday. Frankenstein, the Mummy, the Invisible Man and the rest of the gang when Jonathan, a pesky human, stumbles onto the hotel grounds threatening the success of the event. Dracula and the hotel staff move into action, determined to protect Mavis, as well as the lavish resort sanctuary where monsters can holiday in safety far away from humans.

For your chance to win one of these amazing DVDs, answer the simple question below in our dedicated competition page (USE ONLY THE DEDICATED PAGE & DO NOT SEND MESSAGES OR DO NOT POST MESSAGES ON THE WEBSITE OR ON THIS PAGE AS THE ENTRY WON’T BE VALID – YOU WON’T BE NOTIFIED OF THE WRONG ENTRY) https://londonmumsmagazine.com/competition-area. The question is: ‘What’s the name of Dracula’s daughter?’ The deadline to enter is 28th February 2013.

Tags:  Competition competitions win
This entry was posted on Thursday, February 14th, 2013 at 10:39 am and is filed under Competitions. You can follow any responses to this entry through the RSS 2.0 feed. You can leave a response, or trackback from your own site.