Win 1 of 3 DVD copies of March of the Penguins 2: The Next Step

A decade after the release of his Academy Award®-winning documentary March of the Penguins, filmmaker Luc Jacquet returns to the Antarctic to bring you the heartwarming tale of a first-time father and his newborn chick as they learn to thrive in the world’s harshest conditions. To celebrate the release of March of the Penguins 2: The Next Step, we have teamed up with Lionsgate Home Entertainment UK to give three lucky winners the chance to win a copy of the film on DVD! 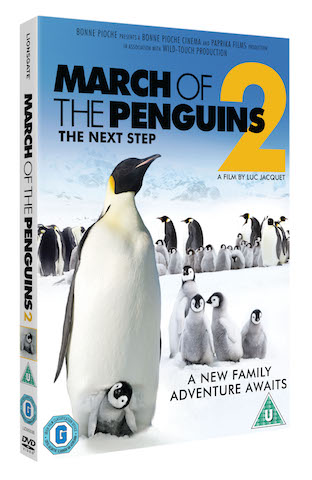 Filmmaker Luc Jacquet returns to the Antarctic to revisit the emperor penguins who call the frozen continent home. A decade after making his Academy Award®-winning March of the Penguins, Jacquet spent two months shooting in the Antarctic winter using the new technology of 4K cameras, airborne drones, and under-ice diving to show the astonishing lives of these mysterious creatures in an entirely new light.

March of the Penguins 2: The Next Step tells the story of two penguins, a father and son, as they face and overcome the almost unimaginable challenges of life in this hostile land.

and answer the following question in the competition form below this post: Name the director of March of the Penguins 2: The Next Step.

Deadline to enter is midnight on 16 December 2018.

March of the Penguins 2: The Next Step is available to own on Digital Download, DVD and Blu-ray™ from 5th November 2018.

This entry was posted on Tuesday, October 30th, 2018 at 11:06 am and is filed under Competitions. You can follow any responses to this entry through the RSS 2.0 feed. Both comments and pings are currently closed.