Three kids find out that it really is a Jurassic world this summer as hilarious family animation DINO TIME roars into cinemas from 22 May 2015 before being unearthed on DVD and digital platforms from 1st June 2015, courtesy of Signature Entertainment. You can now win a copy of this fun movie by entering the competition now. 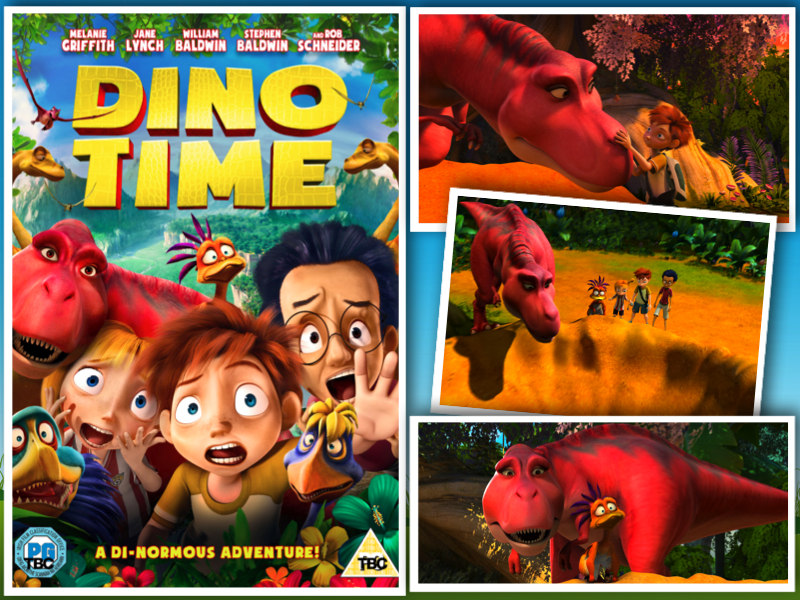 Ernie, his sister Julia and best friend Max uncover the ups and downs of having an inventor for a parent when they accidentally trip Max’s dad’s brand new time machine into action and find themselves flung 65 million years back in time. Landing right in the middle of a trio of dinosaur eggs, the kids are nevertheless surprised to discover they’re not food but family, as doting dinosaurs Tyra (Melanie Griffiths – Working Girl) and Dodger (Rob Schneider – Grown Ups) give them a whistle-stop tour of a land that time forgot.

However, with Tyra’s eggs soon to hatch and with two far less charitable dinosaurs (Stephen Baldwin – The Usual Suspects, William Baldwin – TV’s Gossip Girl) on their tails, Ernie, Julia and Max must find a way back to their own time before it’s too late.

To enter this competition, please write the name of your children’s favourite dinosaur (not from the film but the type of dinosaur, i.e. T-Rex or Stegosaurus etc) in the competition box below this post. Deadline to enter is 5th June 2015. Good luck!

This entry was posted on Tuesday, May 5th, 2015 at 2:06 pm and is filed under Competitions. You can follow any responses to this entry through the RSS 2.0 feed. Both comments and pings are currently closed.