London Mums have 3 copies of a visually stunning new 3D nature film by BBC Earth Films, ENCHANTED KINGDOM, releasing on 3D and 2D Blu-ray™, DVD and Digital Download from 26th October 2015. Narrated by multi-award winning actor IDRIS ELBA (Mandela: Long Walk to Freedom, American Gangster, Luther) and from the creators of Walking With Dinosaurs, ENCHANTED KINGDOM uses ground-breaking technology to bring to life an awe-inspiring 3D journey for the entire family as you travel through the wild and magical continent of Africa, from enchanted forests to deep fantastical seas, whilst having it brought to life by the passionate narration of Idris Elba. By using extraordinary time-lapse photography, sweeping aerial shots and the best in cutting edge 3-D technology, we have a unique glance at the true beauty of our Earth – guaranteed you will never look at nature, or your own world, the same way again! 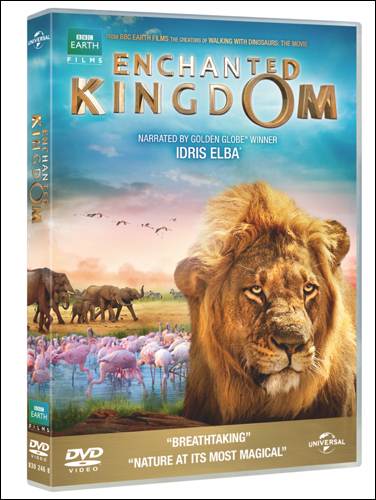 Produced by BBC Earth Films and Reliance Entertainment, and executive produced by  Mike Newell (Great Expectations, Harry Potter and the Goblet of Fire, Donnie Brasco), ENCHANTED KINGDOM brings together a host of British film-making talent. The film is directed by Patrick Morris (Life, Wild Africa) and Neil Nightingale (Walking with Dinosaurs: The Movie, Great Barrier Reef) with screenplay by acclaimed screenwriter, novelist, and playwright Nigel Williams (Charlie, Breaking Up, Scallagrig) and music by the celebrated Scottish composer Patrick Doyle (Brave, Rise of the Planet of the Apes, Gosford Park).

ENCHANTED KINGDOM is a spectacular 3D journey for the entire family, taking the audience on an immersive adventure, transporting the viewer from grey urbanity to the vibrancy and vitality of nature. Experience Africa alongside the filmmakers and go on an astounding exploration through an enchanted land where nature weaves its incredible magic. Discover seven distinct realms in Africa, and see the continent at its most gorgeous and most harsh, most terrible and most beautiful – finally transforming into an abundant paradise. ENCHANTED KINGDOM is a thrilling, immersive journey depicting the wonders of the planet as never seen before-– and revealing the real world to be just as enchanting as any storybook.

For your chance to win a copy of this enchanted DVD, write in the competition form below the name of your or your children’s favourite animal and why. Deadline is midnight 25 November 2015.

This entry was posted on Monday, October 26th, 2015 at 11:00 am and is filed under Competitions. You can follow any responses to this entry through the RSS 2.0 feed. Both comments and pings are currently closed.