Pete’s Dragon , a reimagining of Disney’s cherished family film centered on an orphaned boy named Pete and his best friend Elliot — who just so happens to be a dragon – is out NOW on Digital Download, Blu-ray™ and DVD. You could win this heartwarming adventure to enjoy and just in time to entertain the entire family this Christmas! 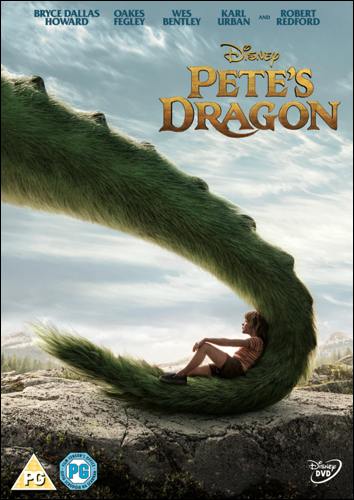 Families will be captivated by this magical movie followed by never-before-seen bonus features, including a revealing look at director David Lowery’s personal diary kept during the filming of Pete’s Dragon including the design process behind the lovable dragon Elliot, deleted scenes, a tour of the film’s breathtaking production location of New Zealand, audio commentary by filmmakers/actors and hilarious bloopers.

Pete’s Dragon stars Bryce Dallas Howard (“Jurassic World”) as Grace, a forest ranger in the Pacific Northwest who comes across 10-year-old Pete, played by Oakes Fegley (“This is Where I Leave You”). Oona Laurence (“Southpaw”) is Natalie, the 11-year-old daughter of Jack, a lumber-mill owner played by Wes Bentley (“The Hunger Games”). Karl Urban (“Star Trek”) is Jack’s bumbling brother Gavin and Oscar®-winner Robert Redford (“Captain America: The Winter Soldier”) portrays Mr. Meacham, an old wood carver who delights the local children with tales of a fierce dragon.

Disney’s Pete’s Dragon is out NOW on Digital Download, Blu-ray™ and DVD.

To be in with a chance of winning one of three DVDs, all you have to do is answer this simple question, who plays the forest worker who befriends Pete?

Entrants must be over the age of 13.

Competition is open to UK residents only.

Entrants must correctly answer the to enter.

Winners will be notified via email.

Winners will be picked at random from all correct entries via the https://londonmumsmagazine.com/ website.

The winners must respond accepting the prize within 7 days of notification otherwise the Promoter reserves the right to redraw the prize from the remaining eligible entries up to 5 times before the competition is then declared void.

In the unlikely event the prize style has discontinued a similar model to the same value will be provided.

There is no cash or other alternative to the prize stated and the prize is non-transferable and no part or parts of the prize may be substituted for other benefits, items or additions.

By entering, all entrants consent to the use of their personal data by the Promoter for the purposes of the administration of this prize draw and any other purposes to which the entrant has consented.

By entering, the winner agrees to take part in reasonable post event publicity and to the use of their names and photographs in such publicity.

The Promoter’s decision is final and binding on the entrants – no correspondence will be entered into.

This entry was posted on Friday, December 9th, 2016 at 2:58 pm and is filed under Competitions. You can follow any responses to this entry through the RSS 2.0 feed. Both comments and pings are currently closed.