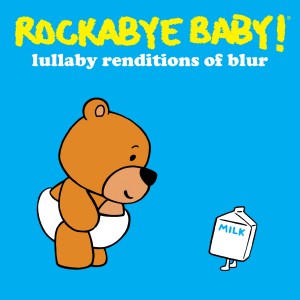 Rockabye Baby music series transforms timeless rock songs into beautiful instrumental lullabies. Delicate instruments such as the glockenspiel, vibraphone, mellotron, harp and bells create a soothing atmosphere of sound. These charming recordings are sophisticated enough for everyone to enjoy, yet gentle enough for you to share with your little ones. The US catalogue currently has over 50 albums in their collection from The Beatles, U2, Bob Marley, Queen, Coldplay, Led Zeppelin, Pink Floyd, Madonna and the Police to name a few. Lullaby Renditions Of Blur is the perfect album to launch the series in the UK. It’s great for new parents or makes the perfect baby shower gift to help sooth & relax mum and dad during those long night feeds!

Rockabye Baby is extremely well known in the States and receives fantastic support including recommendations from well known parents Elton John, David Furnish and The Beckhams who have recently talked on TV and over social networks about how much they love the series.

In US Magazine, Elton topped his little one’s list of albums with Lullaby Renditions of The Beatles. Then in an appearance on “Canada AM,” the nation’s most-watched morning news program, Elton and David touted Rockabye Baby again and revealed that Zachary is also listening to the Green Day and Rolling Stones lullabies.

There’s No Other Way

End of a Century

For more information about Rockabye Baby & Other release check out www.rockabyebabymusic.co.uk

For your chance to win one of these amazing Blur CDs, answer the simple question below in our dedicated competition page (USE ONLY THE DEDICATED PAGE & DO NOT SEND MESSAGES OR DO NOT POST MESSAGES ON THE WEBSITE OR ON THIS PAGE AS THE ENTRY WON’T BE VALID – YOU WON’T BE NOTIFIED OF THE WRONG ENTRY) https://londonmumsmagazine.com/competition-area. The question is: ‘What is the nationality of the band Blur?’ The deadline to enter is 20th April 2013.

To give you an idea of what to expect, check out the rendition of ‘Under the Bridge’ the Red Hot Chilli Peppers (from the same label) – we really love it here at the London Mums HQ 🙂

Tags:  Competition kids' music music win
This entry was posted on Saturday, March 23rd, 2013 at 9:10 am and is filed under Competitions. You can follow any responses to this entry through the RSS 2.0 feed. You can leave a response, or trackback from your own site.