We love books and picture books in particular as you may have seen in our recent Children’s picture books – Spring 2015 Overview. On top of that our London Mums magazine Summer/Autumn issue will have Kids’ Books as its focus including exclusive interviews with the most popular children’s authors in Britain. Watch this space! Meantime don’t miss your chance to enter this amazing competition to win 1 of 2 sets of Catherine Rayner’s picture books worth £30 each. 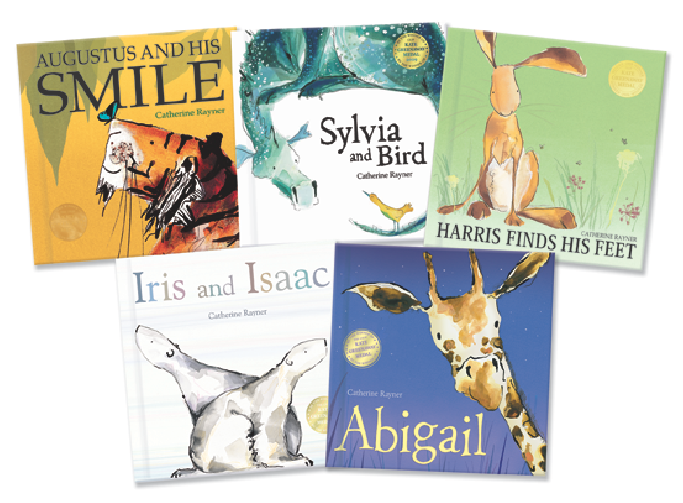 Award-winning author and illustrator Catherine Rayner creates stunning picture books with casts of delightful characters, such as Harris, a hare with exceptionally large feet, and Abigail, a giraffe who loves to count spots and stripes but finds it hopeless when her friends just won’t stand still. Sumptuous illustrations and enchanting texts lie at the very heart of Catherine’s work.

Catherine studied Illustration at Edinburgh College of Art. She fell in love with the city and still lives there with her husband and young son.

She finds huge artistic inspiration in her pets and often uses them as models. But it was creatures of a wilder kind that inspired her first picture book, Augustus and His Smile – Catherine spent hours and hours watching and sketching tigers (in freezing temperatures) at Edinburgh Zoo!

Winner of the 2009 CILIP Kate Greenaway Medal for her second book, Harris Finds His Feet, Catherine has now been shortlisted four times for the award. She was also awarded the Best New Illustrator Award at the Booktrust Early Years Awards in 2006 and was named one of Booktrust’s ten Best New Illustrators in 2008. In 2010, she was the inaugural illustrator in residence at the Edinburgh International Book Festival. Her book Iris and Isaac won the UK Literacy Association Book Award in 2012.

Perfect for readers aged between three and six years old, these titles are:

Augustus and his Smile

To enter the competition, please write the name of your favourite British children’s author in the competition form below this post. Deadline to enter is 4th June 2015.

This entry was posted on Wednesday, May 6th, 2015 at 11:18 am and is filed under Competitions. You can follow any responses to this entry through the RSS 2.0 feed. Both comments and pings are currently closed.