Win 1 of 2 pairs of tickets to see ‘Diana Ross: Her Life, Love and Legacy’ 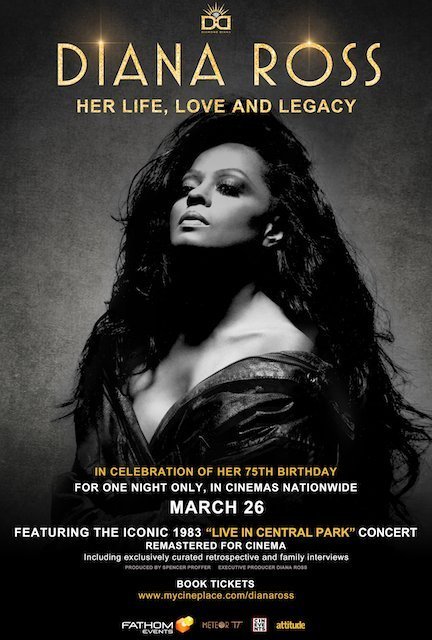 For one night only, with the possibility of selected encores, fans will be treated to a night of celebration and musical excellence as they watch a remastered version of Ross’ iconic 1983 Central Park concert,where nearly 1.2 million people united on the Great Lawn.

The concert, considered one of the most important events in music and entertainment history was hit half way through by a storm of epic proportions. Undeterred by the weather Ross’ heroically battled on in the conditions, until the concert was finally brought to a standstill. Vowing to come back for her fans the Dream Girl remained true to her promise, returning the next day to finish the concert in legendary style.

Alongside the concert showing on the big screen for the first time, the film also includes special, never-before-seen footage and messages from the Ross family, including sons Ross Naess and Evan Ross, daughters Rhonda Ross Kendrick and Chudney Ross, with Tracee Ellis Ross giving a loving and passionate introduction to the film in celebration of the superstar’s legacy.

This amazing event will be in over 250 UK cinemas, with tickets on sale now from www.mycineplace.com/dianaross

Winner can select tickets for any cinema.

For your chance to win a pair of tickets to see Diana Ross: Her Life, Love and Legacy in cinema on 26 March 2019, subscribe to the London Mums Instagram feedhere and write the answer to the following question in the competition form below this post.

The closing date for this competition is 13 March 2019. Two winners will receive a pair of tickets to “Diana Ross, Her Life, Love and Legacy”, consisting of two tickets that can be a mix of adult (aged over 18) and child tickets. Winning tickets are available for screenings of “Diana Ross, Her Life, Love and Legacy”, Please visit www.mycineplace.com/dianaross for a full list of participating cinemas. Chosen site is subject to availability. If tickets at your chosen site are no longer available then we will endeavour to provide you with the closest alternative. Prize does not include travel expenses. Winning tickets cannot be exchanged for cash or an alternative film. You must be aged 16+ to enter this prize draw. Winners will be contacted before 17th March by email or telephone and have 24 hours to respond. Information on how to pick up winning tickets will be provided to winner directly by email.

This entry was posted on Friday, March 1st, 2019 at 1:44 pm and is filed under Competitions. You can follow any responses to this entry through the RSS 2.0 feed. Both comments and pings are currently closed.