When it comes to Sooty my 6 year old son Diego gets crazy. I did not understand the appeal until we went to last year’s Christmas show which I also enjoyed a lot. Since then, Diego has watched all the Sooty shows and imitated the characters at every opportunity. Sooty and the gang is a traditional good fun show, which is definitely worth watching live. 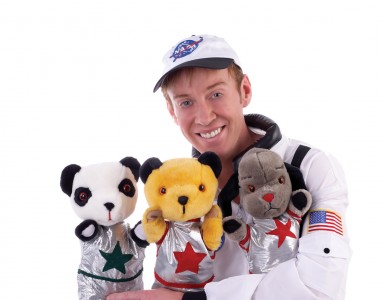 We have teamed up with ‘SOOTY IN SPACE’ this year which will perform AT THE DUCHESS THEATRE LONDON from Friday 21st December 2012 to 5th January 2013.

For your chance to win one of these amazing family tickets, answer the simple question below in our dedicated competition page (USE ONLY THE DEDICATED PAGE & DO NOT SEND MESSAGES OR DO NOT POST MESSAGES ON THE WEBSITE OR ON THIS PAGE AS THE ENTRY WON’T BE VALID – YOU WON’T BE NOTIFIED OF THE WRONG ENTRY) https://londonmumsmagazine.com/competition-area. The question is: ‘What’s the name of the dog friend of Sooty?’ The deadline to enter is 6th December 2012. 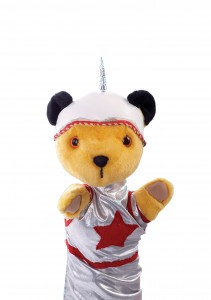 Can’t wait to win?! Get your tickets from www.nimaxtheatres.com or www.thesootyshow.com.

5,4,3,2,1 blastoff! Direct from their hit ITV series, Sooty, Sweep, Soo and Richard are to return to London’s West End for a second year running with their brand new spectacular festive adventure, Sooty in Space!

Following the huge success of Sooty’s West End run last year and back due to high demand, this new comedy rich show is set to thrill family audiences again this Christmas. This year also marks 47 years since Harry Corbett started the tradition of presenting Sooty in London over the festive season.

It’s a show packed full of surprises….Watch out for the flying Cups and Saucers, the Dancing Martians and the Giant Triplod! See the Super Space Station complete with Sooty’s amazing robot, Harry.

‘The Flight to Mars’ is presented in magical 3D with a free pair of space goggles for everyone to take home. With magic, music and lots of audience participation, Sooty in Space is an intergalactic giggle for the whole family.

Host Richard Cadell said: “I’m absolutely thrilled to be coming back to London’s West End this Christmas, we’re really excited to perform Sooty in Space as it’s such a great show and so much fun.”

“Sooty made a comeback on CITV last year, and immediately re-established his popularity with a new generation” DAILY MAIL

“Richard Cadell is a born entertainer” THE GUARDIAN

“Sooty is on the right hands”- MATTHEW CORBETT

The Sooty Show is currently aired twice daily weekdays on CITV. The Sooty Show Christmas Special DVD is available from all major retailers on the 5th November 2012.

Tags:  Christmas Christmas party christmas shows panto sooty
This entry was posted on Wednesday, November 7th, 2012 at 11:23 pm and is filed under Blog, Competitions. You can follow any responses to this entry through the RSS 2.0 feed. You can leave a response, or trackback from your own site.