To celebrate the release, we are giving the chance to win a copy of Wild Rose on DVD to two lucky London Mums’ readers!

Wild Rose is about a young woman fresh out of jail with two young kids in tow, who dreams of getting out of Glasgow and making it as a country singer in the USA. 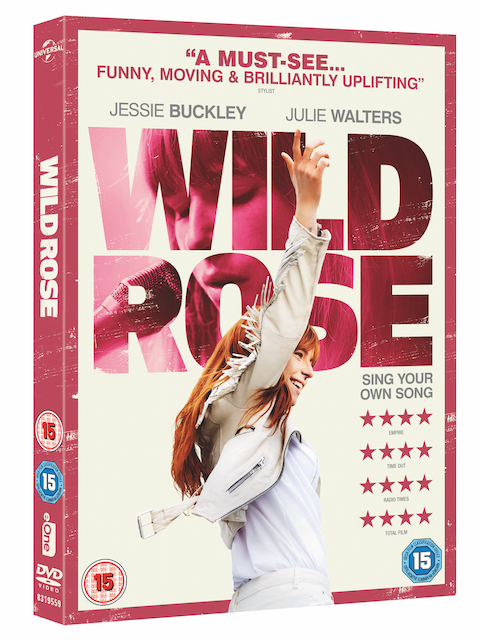 Rose-Lynn Harlan (Jessie Buckley), is overflowing with talent, charisma and cheek. Fresh out of jail and with two young kids, all she wants is to get out of Glasgow and make it as a country singer in Nashville. Her mum Marion (Julie Walters) has had a bellyful of Rose-Lynn’s Nashville nonsense. Forced to take responsibility, Rose-Lynn gets a cleaning job, only to find an unlikely champion in the middle-class lady of the house (Sophie Okonedo).

Jessie Buckley performs her own songs in the film, all of which are featured on the official soundtrack which has been released by Island Records.

For your chance to win a copy of Wild Rose on DVD, here’s what you need to do: Please subscribe to one of the London Mums social media platforms of your choice

and simply answer the question below in the competition form under this post.

Deadline to enter is at midnight on 19 October 2019. Who plays Rose-Lynn Harlan’s mum in the film?

Wild Rose is out on DVD and Digital Download now.

Why you need to see Wild Rose

Wild Rose delighted audiences when it came into cinemas earlier this year, but did you manage to catch it? So if you missed it in cinemas we’ve pulled together the five top reasons of why you need to see Wild Rose.

Jessie Buckley took the world by storm as the star of the heart warming, ‘Wild Rose’ performing all her own songs in the film. The film features original country songs written by Jack C Arnold and are honest and poignant; capturing longing and loss. Wild Rose focuses on the transformative power of music to change lives and the music within the film gives Rose- Lynn a purpose, setting her free.

One of the best reasons to watch ‘Wild Rose’ is the extremely talented Jessie Buckley, whom plays ex-convict from Glasgow Rose-Lynn. Attempting to make it as a country singer in Nashville Rose-Lynn is a single mum straight out of prison with two kids to provide for and a big dream to live! However, with a curfew of 7 pm her chances of making it to Nashville seem but a distant dream. Buckley has already caught attention for her mesmeric performance in Chernobyl and War and Peace and ‘Wild Rose’ allows Buckley to show off her impressive vocals on a niche country soundtrack. Buckley strikes a balance between portraying Rose- Lynn’s anger and ambition tied together with the emptiness inside her.

Dame Julie Walters, an actress in her prime, has received an array of award nominations for her performance in Billy Elliot and Educating Rita, amongst others. She most recently has starred in ‘Wild Rose’, as Rosie- Lynn’s straight talking mother Marion. Marion is sensible in contrast to her daughter’s reckless behaviour she tries her best to persuade her daughter to put her children’s wellbeing first. Julie Walter’s volatile relationship with her own mother struck parallels between the relationship portrayed within Wild Rose; resulting in a raw, and emotional performance.

‘Wild Rose’ is an aspirational story, Rosie – Lynn is a free spirit who simply won’t let herself be constrained by society. She is a single mum fresh out of prison with two children to support and a Nashville dream she wants to achieve! Wild Rose is a fable of hard times, failure and redemption that is bound to pull on your heartstrings.

Many films tend to cover the rising star storyline similarly to ‘A star is born’ starring Lady Gaga however ‘Wild Rose’ is unique, a simple breath of fresh air. Rose- Lynn doesn’t depend on a man to help her make it, in fact she doesn’t need a man at all. Through her perseverance and strong willed nature Rose- Lynn is determined to be her own star and write her own future!

This entry was posted on Monday, August 19th, 2019 at 1:41 pm and is filed under Competitions. You can follow any responses to this entry through the RSS 2.0 feed. Both comments and pings are currently closed.