Who does not like Horrid Henry’s books? I am sure all kids with their parents have had lots of laughs over Horrid Henry’s naughtiness and mischief. I certainly have! Well this ‘Horrid Henry: Rocking the World’ DVD is the TV version of Francesca Simon’s books. 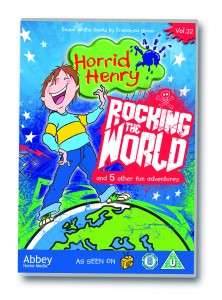 The Horrid Henry: Rocking the World DVD was released on 23rd September 2013 and is now up for grab with our fab competition.

Horrid Henry Goes to the Theatre

For your chance to win one of these amazing DVDs, answer the simple question below in our dedicated competition page (USE ONLY THE DEDICATED PAGE & DO NOT SEND MESSAGES OR DO NOT POST MESSAGES ON THE WEBSITE OR ON THIS PAGE AS THE ENTRY WON’T BE VALID – YOU WON’T BE NOTIFIED OF THE WRONG ENTRY) https://londonmumsmagazine.com/competition-area. The question is: ‘Tell us the name of your favourite Horrid Henry’s book and why’ The deadline to enter is 26th October 2013.

Read Francesca Simon‘s interview about how she came up with the idea for Horrid Henry’s stories on the official character’s website.

Unsurprisingly she got the idea for Horrid Henry when a friend asked her to write a story about a horrid child. Horrid Henry was born on the spot. She also wanted to write about sibling rivalry and families where one child was considered “perfect” and the other “horrid.”

This entry was posted on Saturday, September 28th, 2013 at 11:15 am and is filed under Competitions. You can follow any responses to this entry through the RSS 2.0 feed. You can leave a response, or trackback from your own site.