To help celebrate Horrible Histories 20th Anniversary BBC Worldwide are releasing Series Four on DVD. The riotous runaway success returns and it’s more horrible, gorier, more ghastly and hilarious than ever. This hilarious look at historical events is released on DVD on 27 May 2013 priced at £10.20. 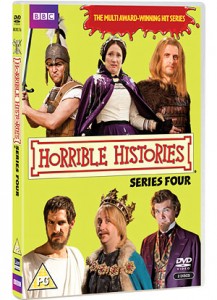 Tune into Charles Darwin as David Bowie, a boy band of pilots from the Battle of Britain, nursing pioneer Mary Seacole in the style of Beyoncé, a big love ballad from Victoria and Albert, and the Pilgrim Fathers in Jay-Z and Alicia Keys-style.

Watch the Historical Apprentice, a team of Neanderthals against a team of Homo Sapiens in a Stone Age hunting challenge while a team of pirates compete with sea merchants to avoid being fired.

Join the Historical MasterChef’s who will be cooking up Saxon, Tudor, Crusader and Stone Age fayre and the intrepid Bob Hale is back to give high-octane whistle-stop reports on Human Evolution, Roman Britain, the Renaissance, and Napoleon. Starring Mathew Baynton, Simon Farnaby, Martha Howe-Douglas, Jim Howick, Laurence Rickard and Ben Willbond.

For your chance to win one of these amazing DVDs, answer the simple question below in our dedicated competition page (USE ONLY THE DEDICATED PAGE & DO NOT SEND MESSAGES OR DO NOT POST MESSAGES ON THE WEBSITE OR ON THIS PAGE AS THE ENTRY WON’T BE VALID – YOU WON’T BE NOTIFIED OF THE WRONG ENTRY) https://londonmumsmagazine.com/competition-area. The question is: ‘What is the name of the famous British Award Horrible Histories received?’ The deadline to enter is 15th June 2013.

This entry was posted on Thursday, May 23rd, 2013 at 9:00 am and is filed under Competitions. You can follow any responses to this entry through the RSS 2.0 feed. You can leave a response, or trackback from your own site.