Friendship and adventure abound with the heart-warming tales of three-year-old Masha and her retired circus star friend, Bear, in their very first DVD collection, Masha and the Bear – How They Met released by Abbey Home Media on Monday 25th April 2016. 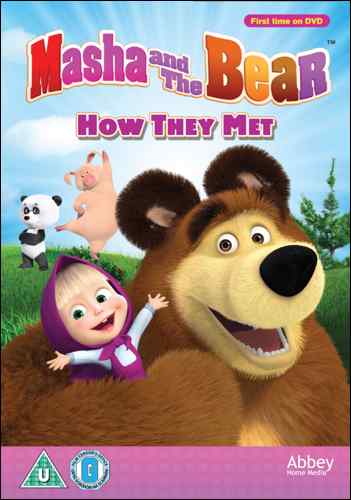 Join Masha, the Bear and all her woodland friends in the series that is currently taking the world by storm. A retired circus bear settles into the woods and prepares for a quiet new life surrounded by peace and tranquility until he is introduced to an adventurous little girl named Masha.

Masha is an energetic three-year-old who lives in an old train station in the forest. Precocious, silly, and friends with everyone she meets, this energetic girl can’t seem to keep herself out of trouble.

Bear is a warm, fatherly figure that does his best toguide his friend and keep her from harm, often ending up the unintended victim of her misadventures. Though he enjoys his quiet time alone, he misses those moments when Masha is not around.

Together with a loveable group of friendly animals that have made the forest their home , Masha and the Bear entertains adults and children alike, teaching viewers about creativity, loyalty and true friendship.

This bumper collection of tales is sure to delight young fans.

For your chance to win one of these Masha and the Bear DVDs, subscribe to our London Mums YouTube channel https://www.youtube.com/user/londonmums/videos and confirm this along with your details in the competition form below this post by midnight 20th May 2016.

This entry was posted on Saturday, April 23rd, 2016 at 1:05 pm and is filed under Competitions. You can follow any responses to this entry through the RSS 2.0 feed. Both comments and pings are currently closed.