Five London Mums have the chance to win a copy of BBC classic The Further Adventures of the Musketeers (1967) DVD before it is released by Simply Media for the very first time on 23 May 2016. 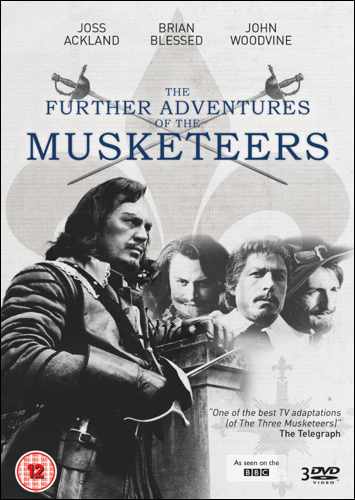 Starring Brian Blessed (Z Cars), Joss Ackland (The Hunt for Red October) and Michael Gothard (The Three Musketeers), this classic adventure series is set twenty years on from the original and is based on Alexander Dumas’ sequel of The Three Musketeers, Twenty Years After.

Romance, action, betrayal, suspense—this timeless BBC adaptation of The Three Musketeers has it all.

In 1620s France, the young, poor and unfailingly ambitious d’Artagnan (BAFTA- nominee Joss Ackland) leaves his humble village and treks to Paris on a quest to join the Musketeers of the Guard. At first, he’s ridiculed, abused, and scorned—but after he impresses the three highest-esteemed musketeers in the land, they take him under their wing.

With Porthos (Brian Blessed, Z Cars), Athos (Jeremy Young), and Aramis (John Woodvine) at his side, d’Artagnan sharpens his skills as a swordsman and, more often than not, is forced to put them to the test. The gang becomes entangled in a web of lies, love, violence and deceit among the French royalty, treacherous territory where even one wrong move could land them in prison—or worse.

Over the course of 16 thrilling, masterfully-crafted episodes, this series from “the heyday of the BBC’s classic Sunday serial” (The Telegraph) traces through Alexandre Dumas’ masterwork with style—bringing 17th century France to life in all its swashbuckling, chivalric, captivating glory.

This is a real treat so don’t miss your chance to win a copy. To enter, write the name of your favourite Musketeers in the competition form below this post. Deadline to enter is 3 June 2016. En guarde and good luck!

This entry was posted on Wednesday, May 4th, 2016 at 11:05 am and is filed under Competitions. You can follow any responses to this entry through the RSS 2.0 feed. Both comments and pings are currently closed.