Win 1 of 4 posters of Ender’s Game

If you think this is just for kids, think again! Ender’s Game, the fast paced sci-fi adventure is waiting to wow audiences with action packed sequences that will blow your mind with a stunning array of special effects. 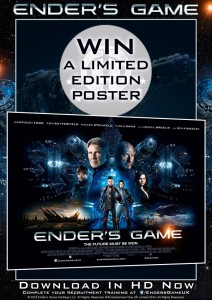 With a cast of established talent including Harrison Ford and a standout performance from Asa Butterfield, this is a sci-fi adventure with guts and a whole lot of heart not to be missed.

In the near future, a hostile alien race have attacked Earth. If not for the legendary heroics of International Fleet Commander, Mazer Rackham (Ben Kingsley), all would have been lost. In preparation for the next attack, Colonel Graff (Harrison Ford) and the International Military are training only the best young children to find the future leader. Ender Wiggin (Asa Butterfield), a shy, but strategically brilliant boy is pulled out of his school to join the elite. Arriving at Battle School, Ender quickly and easily masters increasingly difficult war games, distinguishing himself and winning respect amongst his peers. Ender is soon ordained by Graff as the military’s next great hope, resulting in his promotion to Command School. Once there, he’s trained by Mazer Rackham, himself, to lead his fellow soldiers into an epic battle that will determine the future of Earth and save the human race.

Much like the character portrayed in Ender’s Game this film is ahead of its time. It’s action packed with a twist that will have you chomping at the bit for more. Harrison Ford, Viola Davis, Asa Butterfield are all put to the test in this science fiction actioner that does a whole lot more than it says on the tin.

For your chance to win one of these posters, answer the simple question below in our dedicated competition page https://londonmumsmagazine.com/competition-area. The question is: ‘What’s the poster you used to have in your childhood bedroom?’ The deadline to enter is 30th March 2014.

Own Ender’s Game Now in HD from iTunes https://itunes.apple.com/gb/movie/enders-game/id724568224

This entry was posted on Friday, March 14th, 2014 at 8:04 pm and is filed under Competitions. You can follow any responses to this entry through the RSS 2.0 feed. You can leave a response, or trackback from your own site.