Get ready for the third instalment from the Middle School series from world best-selling author James Patterson, as the hilarious MIDDLE SCHOOL: MY BROTHER IS A BIG FAT LIAR is available in paperback now. 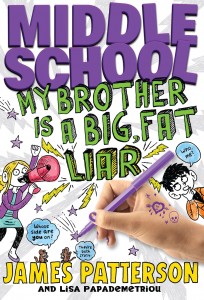 Georgia Khatchadorian plans to excel at Hills Village Middle School in all the places her troublemaking brother failed. She’s even bet him that she’ll quickly become one of the most popular girls in school. But Rafe left a big mark at HVMS, and no one will give Georgia a chance! Even worse, Rafe has sneakily signed up her band to play at the school dance, and she’s terrified to embarrass herself in front of the snooty ‘Princesses’ who run the school and the boy who’s caught her eye.

Will she be able to overcome her fears and win her bet with Rafe? Find out THE TRUTH about Rafe Khatchadorian’s sister in the first Middle School story from the point of view of the hilarious Georgia – a girl who’s ready to speak her mind!

Rafe and Georgia’s brother and sister banter will have you in stitches in the hilarious MIDDLE SCHOOL: MY BROTHER IS A BIG FAT LIAR, is perfect to keep eh kids entertained during the February half-term holidays.

Middle School How I Got Lost in London World Book Day from Cornerstone on Vimeo.

For your chance to win one of these books, answer the simple question below in our dedicated competition page https://londonmumsmagazine.com/competition-area. The question is: ‘What’s your funniest memory from middle school?’ The deadline to enter is 28th March 2014.

This entry was posted on Tuesday, March 11th, 2014 at 7:16 pm and is filed under Competitions. You can follow any responses to this entry through the RSS 2.0 feed. You can leave a response, or trackback from your own site.