Win 1 of 3 copies of You Can Tutu Digital Download

To celebrate the release of a heart-warming family film You Can Tutu on Digital Download, The Movie Partnership would be delighted to offer copies of the movie to give away to three lucky readers of the London Mums magazine! 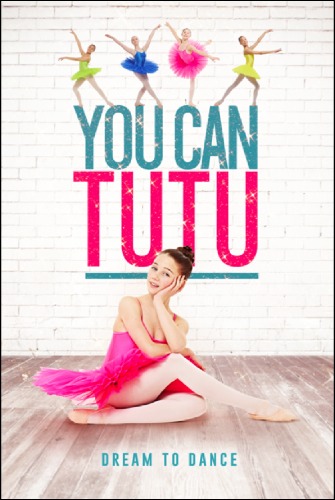 Living in a world, where people find it extremely hard to just be and believe in themselves, 12-year-old Tutu Marlow hasn’t ever really had that problem. That is until her first day at Best Pointe Ballet School. Tutu was born to dance. Pirouetting across a stage is when she feels most at home. Her dad, Dan, has always believed in her, but it’s always been just the two of them… until now. Moving to a new neighbourhood, a new high school and a new ballet school is more than just a bit unsettling.

It’s downright difficult. It’s not just the school’s uptight head dance teacher Tabitha who’s doing her best to knock Tutu’s confidence down a peg a two. The other girls are competitive and mean, and their mothers aren’t much better. At least Tutu has made some great new friends. Clumsy Rosily and spelling bee champion Mannie think Tutu’s unique dance talent is pretty awesome. So does the new dance teaching assistant, Kat. But if Best Pointe is going to have a chance at the National Ballet Championships, Tutu is going to have to learn to believe in herself.

The film takes you on a journey of a girl, who is first filled with an abundance of confidence, then drained of it. Forcing her to realize that if she ever wants to achieve her dream of dancing in a lead role she must first believe in herself and her natural born ability to dance.

To win a copy of You Can Tutu Digital Download, write the name of your favourite ballerina from a movie in the competition form below this post. Deadline to enter is midnight on 14 September 2017.

You Can Tutu is available to watch on Digital Download as of NOW!

This entry was posted on Thursday, August 3rd, 2017 at 11:09 am and is filed under Competitions. You can follow any responses to this entry through the RSS 2.0 feed. Both comments and pings are currently closed.