Win 1 of 2 pairs of tickets and film posters to One Direction: Where We Are – The Concert Film

If you or your kids are big One Direction fans this is your chance to win tickets to the exclusive screening of ONE DIRECTION: WHERE WE ARE – THE CONCERT FILM IN CINEMAS FOR ONE WEEKEND ONLY on 11th & 12th October 2014 IN 70 COUNTRIES AROUND THE WORLD. 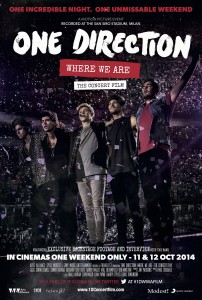 This one off cinema event is released in an unprecedented 70 countries worldwide on over 3,000 screens and 10,000 screenings for one very special weekend.

One Direction: Where We Are –The Concert Film give fans around the world an un-missable opportunity to join Niall, Zayn, Liam, Harry and Louis on the Italian leg of their sell-out world tour. Recorded at the iconic San Siro stadium in Milan, fans can see it first on the big screen and enjoy a spectacular 75 minute full concert experience.

The cinema event also features an exclusive never before seen backstage interview with the band, only available in cinemas. This unique and intimate interview hosted by Executive Producer Ben Winston reveals more than ever before about the band and their life on their biggest ever tour.

One Direction: Where We Are – The Concert Film is produced by Fullwell 73 and re-unites producing partners from This is Us, Ben Winston & executive producers Simon Cowell, Sonny Takhar, Richard Griffiths, Harry Magee and Will Bloomfield.

For your chance to win one of these pairs of tickets, write in the competition form below the name of your (or your child’s) favourite 1D boy. Deadline to enter is 5th October 2014.

One Direction: Where We Are: Live from San Siro Stadium is coming to DVD on 1st December 2014.

TICKETS ARE SELLING OUT FAST, VISIT

This entry was posted on Thursday, October 2nd, 2014 at 1:00 pm and is filed under Competitions. You can follow any responses to this entry through the RSS 2.0 feed. Both comments and pings are currently closed.