The Adventures of RoboRex  is a new family film that dog and technology lovers will absolutely love! My 7 year old son watched it already a few times and every time he discovers new details that make him want to create his own robot dog. 🙂 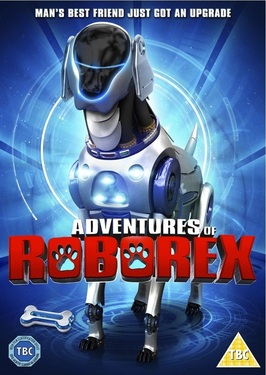 James Miller is a school boy who gets often bullied at school because he is a geeky and sensitive child. His best friend is his beloved golden retriever, Rex.

One day an outer space capsule lands in his backyard and a robot dog emerges. This will change his life forever. The robot dog tells him he is RoboRex, and that he has come from the future to stop an evil man named Professor Apocalypse from taking over the world, along with his robot companion Destructo-Cat. With the help of Rex and RoboRex, James embarks on an adventure to save the future and the life of his dog too.

There’s a good mix of action and fun in this movie that keeps you glued to the screen for almost 2 hours. We loved the scene when James wakes up in the morning thanks to a geeky machinery that he created which reminds to the one used by Marty in Return to the Future.

To celebrate the release of Roborex on 16th June 2014 we are giving away 10 DVD copies. For your chance to win a copy, please enter the name of your favourite type of dog using the competition form below. The deadline to enter is 5th July 2014.

This entry was posted on Tuesday, June 10th, 2014 at 7:00 pm and is filed under Competitions. You can follow any responses to this entry through the RSS 2.0 feed. Both comments and pings are currently closed.