Win 1 of 5 copies of ‘MIDDLE SCHOOL: GET ME OUT OF HERE!’ by James Patterson and Chris Tebbetts Illustrated by Laura Park

The sequel to the Sunday Times best selling illustrated novel Middle School: The Worst Years of My Life.
James Patterson
and Chris Tebbetts
Illustrated by Laura Park
‘MIDDLE
SCHOOL:
GET ME OUT OF HERE!’ is published by Young Arrow in hardback on 26 April 2012, RRP £9.99. 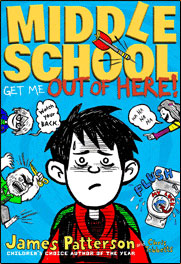 For your chance to win one of these books, answer the simple question below in our dedicated competition page (USE ONLY THIS DEDICATED PAGE – DO NOT SEND MESSAGES AND DO NOT POST MESSAGES HERE AS WE WON’T ENTER YOU OTHERWISE) https://londonmumsmagazine.com/competition-area. The question is: ‘What’s the name of the illustrator of this book?’ The deadline to enter is 20th May 2012.

Maximum Ride series: ‘Has all the characteristics of his work … pace, action, mystery and cool’ – Sunday Times

Children’s Choice Book Award ‘Author of the Year’ winner (2010) James Patterson, one of the best-known and biggest-selling writers of all time is releasing MIDDLE SCHOOL: GET ME OUT OF HERE!, a heart-warming and uproariously funny novel with over 100 illustrations in hardback on 26 April 2012.

James Patterson’s follow-up to bestseller Middle School: The Worst Years of My Life which spent more than 12 weeks in the Sunday Times top ten bestseller list and peaked at number two is another riotous and heart-warming story about living large.

After sixth grade, the very worst year of his life, Rafe Khatchadorian thinks he has it made in seventh grade. He’s been accepted to art school in the big city and imagines a math-and-history-free fun zone. Wrong! It’s more competitive than Rafe ever expected and to score big in class he needs to find a way to turn his boring life into the inspiration for a work of art. His method? Operation: Get a Life! Anything he’s never done before, he’s going to do it, from learning to play poker to going to a modern art museum. When his newest mission uncovers secrets about the family Rafe’s never known, he has to decide if he’s ready to have his world turned upside down.

From his Pageturner Awards (which rewarded groups and individuals for creative and effective ways of spreading the joy of reading) to his website ReadKiddoRead.com (which helps adults find books that kids are sure to love), James Patterson is a lifelong champion of books and reading.

ABOUT THE AUTHOR JAMES PATTERSON

Is one of the best-known and biggest-selling writers of all time. He is the author of some of the most popular series of the past decade – the Alex Cross, Women’s Murder Club and Detective Michael Bennett novels – and he has written many other number one bestsellers including romance novels and stand-alone thrillers. He lives in Florida with his wife and son. James is passionate about encouraging children to read. Inspired by his own son who was a reluctant reader, he also writes a range of books specifically for young readers. James has formed a partnership with the National Literacy Trust, an independent, UK-based charity that changes lives through literacy. In 2010, he was voted Author of the Year at the Children’s Choice Book Awards in New York.

Tags:  books' reviews children's books' reviews Competition james patterson win
This entry was posted on Thursday, April 26th, 2012 at 8:00 am and is filed under Blog, Competitions. You can follow any responses to this entry through the RSS 2.0 feed. You can leave a response, or trackback from your own site.