Matilda Marchmont is the most exquisite doll of recent times designed exclusively for girls aged 8 – 11. She is the first in a line of historical dolls from boutique British toy company Daughters Of History and combines play with learning in one beautiful package. Matilda is just an ordinary teenage girl from the Tudor era, her life changes when she is called to the court of King Henry the Eighth as lady in waiting for Catherine Howard. For your chance to win 1 of 10 copies of ‘Matilda’s Secrets’ book enter your answer to the simple question below in our dedicated competition page https://londonmumsmagazine.com/competition-area The question is ‘In what era does Matilda live’? Deadline to enter is 27th November 2011. 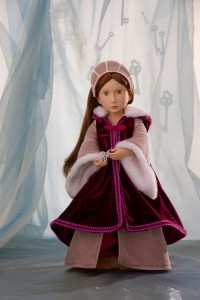 A pretender to the Horrid Henry throne has emerged. Launched by boutique British company Daughters Of History, the first in their series of historical hair-raisers is Matilda’s Secret. Set in Tudor times, the book follows the thrills and spills of 13-year-old Matilda Marchmont who is lady-in waiting to Katherine Howard.

Written by BAFTA-nominated Sandra Goldbacher, the 180-page novel follows Matilda from her sleepy childhood in Norfolk to the erratic hurley-burley of court life. Beautifully-illustrated throughout, the book is no fairy tale and brings to life the brutality of the age including the execution of Katherine Howard.

Daughters of History plan to release a new novel each year complete with a period doll and accessories.

The roll out is in In line with Key Stage 2 of the National Curriculum, as follows:

Matilda’s Secret costs £6.99 and is available from www.agirlforalltime.com

This entry was posted on Friday, November 4th, 2011 at 11:02 pm and is filed under Blog, Competitions. You can follow any responses to this entry through the RSS 2.0 feed. You can leave a response, or trackback from your own site.