La Senza Pets on Pijamas’ cute competition: enter if you have a dog!

La Senza are on a nationwide hunt to find the cutest and most beloved British pets. Does the camera adore your dog as much as you do? Are you convinced your rabbit is destined to be a star? If you think your pet has what it takes, La Senza want you to send in a photo and the winning entries will be featured on a cute and quirky pyjama set as part of their bestselling ‘Animal Pyjama’ collection. The sets will available to buy in La Senza stores across the UK next year! Deadline to enter 23rd October 2011! 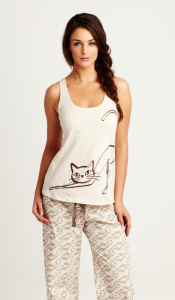 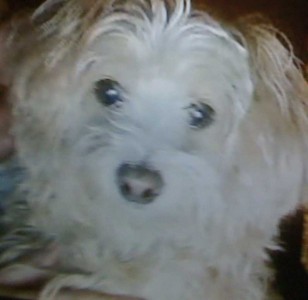 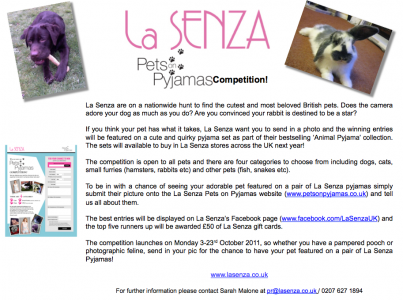 The competition is open to all pets and there are four categories to choose from including dogs, cats, small furries (hamsters, rabbits etc) and other pets (fish, snakes etc).

To be in with a chance of seeing your adorable pet featured on a pair of La Senza pyjamas simply submit their picture onto the La Senza Pets on Pyjamas website and tell us all about them.

The best entries will be displayed on La Senza’s Facebook page and the top five runners up will be awarded £50 of La Senza gift cards.

The competition launches on Monday 3rd October – 23rd October 2011, so whether you have a pampered pooch or photographic feline, send in your pic for the chance to have your pet featured on a pair of La Senza Pyjamas!

This entry was posted on Friday, October 7th, 2011 at 11:56 am and is filed under Blog, Competitions. You can follow any responses to this entry through the RSS 2.0 feed. You can leave a response, or trackback from your own site.