The contemporary retelling of the beloved classic FOOTLOOSE debuts on Blu-ray and DVD on February 6, 2012 from Paramount Home Entertainment. Boasting high-energy dancing, an inspirational story and an impressive cast of rising stars and screen veterans, writer/director Craig Brewer’s (Hustle & Flow) modern update thrilled audiences of all ages with its combination of youthful spirit and infectious fun. Deadline to enter this competition is 20th February 2012. 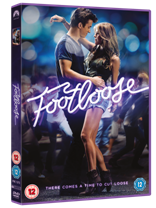 For the chance to win one of these amazing DVDs, enter your answer to the simple question below in our dedicated competition page https://londonmumsmagazine.com/competition-area. The question is: ‘What’s the name of the actor playing Ren MacCormack’s character in this contemporary take of Footloose?’

Newcomer Kenny Wormald stars as Ren MacCormack, a city kid who finds himself in the small town of Bomont where dancing has been outlawed. Ren goes up against Bomont’s reverend (Dennis Quaid) to challenge the ban with the help of the minister’s daughter (Julianne Hough, “Dancing with the Stars”) and in the process reminds the entire town that dancing is more than youthful exuberance—it’s a celebration of life. The film also stars Andie MacDowell (Four Weddings and a Funeral) and Miles Teller (Rabbit Hole) and features an outstanding soundtrack with artists including Blake Shelton, Big & Rich, Ella Mae Bowen and more.

The FOOTLOOSE Blu-ray includes over an hour of bonus features such as deleted scenes, a look back at the original film, featurettes on the stars and their dancing, commentary by Brewer, music videos and more.

Footloose is available to own on Blu-ray and DVD on 6th February, 2012 from Paramount Home Entertainment.

Footloose is available on Blu-ray & DVD on 6th February 2012 from Paramount Home Entertainment. Pre-order your copy now from Play.com www.play.com

This entry was posted on Saturday, January 14th, 2012 at 9:55 pm and is filed under Blog, Competitions. You can follow any responses to this entry through the RSS 2.0 feed. You can leave a response, or trackback from your own site.