Now you can have snowy fun without the big freeze! New Floof is a lighter-than-air, snowy white, moldable compound that is just perfect for indoor snow fun!  Mold it, squish it and build all kinds of creations – the fun is Floof-tastic! 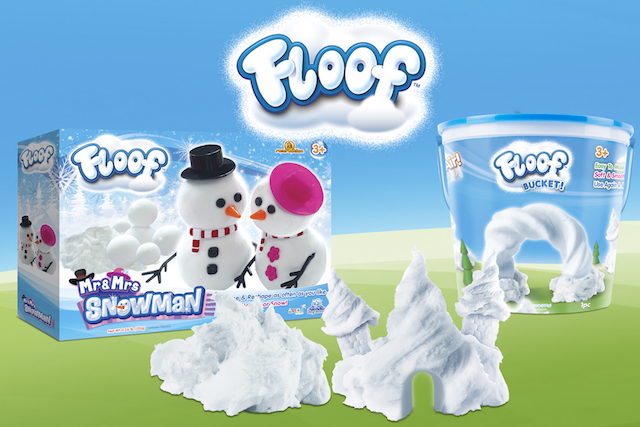 Our winner will receive a bumper Floof bundle worth over £80 including Floof Mr & Mrs Snowman Set which features everything you need build 2 mini snow characters, 1 x Floof Builder Set and 3 buckets of Floof.

Squishy fun just got Floof-tastic! New Floof is the lighter than air, moldable material that sticks to itself, making it easier than ever to make exciting creations in seconds.   With its fluffy, white and light texture, Floof is ideal for creating the ultimate indoor snowball fight or just letting imaginations run wild this Christmas!

Suitable for children aged 3 years and up, Floof is great for sensory play and encouraging creativity and it’s not just kids that will love it. We’re delighted to offer our lucky winner the chance to get their hands on a mega Floof bundle including the following:

This handy storage bucket is packed with 240g of lighter than air, reuasble Floof compound.  Plenty of Floof in here to keep you squishing and molding for months!  When the fun is over, simply put all the Floof back in the bucket to store. Our winner receives a whopping three of these buckets.

What Christmas is complete without a Snowman or two?  This year good weather can’t spoil the snowy fun! This handy Floof set contains everything you need to build two mini snowman characters including Floof and character parts such as hats and scarves.  As Floof is reusable, when you’ve created Mr and Mrs Snowman, simply start all over again!

This great set includes 120g of Floof compound, a roller handle with two interchangeable patterned rollers and 2 scraper tools.   The included handy tray is the perfect place to build your creations for easy clean up.

Floof is available at all leading toy retailers including Smyths Toys and Very.co.uk www.smythstoys.com

and answer the question below in the competition form below this post:

What’s the favourite Christmas present you have been gifted and why. Deadline to enter is midnight on 10th December 2018.

How to build the perfect snowman

This entry was posted on Wednesday, October 10th, 2018 at 11:05 am and is filed under Competitions. You can follow any responses to this entry through the RSS 2.0 feed. Both comments and pings are currently closed.